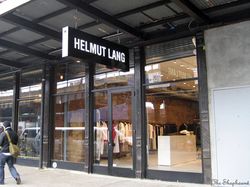 Some will remember Helmut Lang's Greene Street boutique as the epicenter for a certain minimalist fashion moment a little over a decade or so ago, but that store closed after Prada drove Lang from his own label and ran his business into the ground decided to divest itself of some of the designer labels it had acquired a few years earlier.

But that was a different Helmut Lang, of course. Now the Lang-less label —let's call it Helmut Lang 2.0— is making a return to SoHo. Though its namesake is long gone, replacement designers Michael and Nicole Colovos have proved themselves to doubters and made the label a contemporary department success. Elle tells us that the label's Washington Street boutique has shut its doors and packed up for a move to the corner of Mercer and Spring Streets. The newer, bigger store is also said to be stocking the new Theyskens' Theory collection from Helmut Lang's current parent company. We should remember that when the Meatpacking District location opened, it was meant to stand only until a better permanent space could be designated. The new store will open on February 8th, just in time for Fashion Week. The Washington Street space (pictured above) will swiftly be filled by Improvd, a new line from a former Diesel designer and the people behind the NoHo jeans palace Atrium.