J.Crew's Flatiron Store Is 33.3% Open
& Little Sister Madewell
Will Soon Be Joining It

Etro Throws Off The Wraps In SoHo 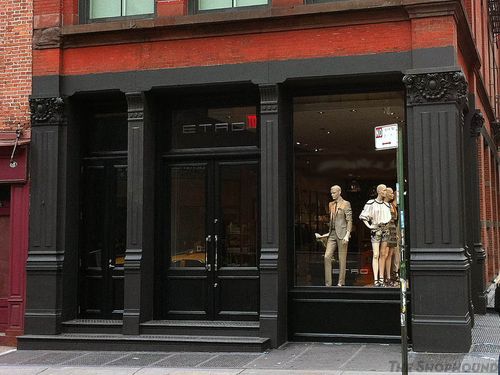 It was only weeks ago that The Shophound was wondering if Etro would ever open its long-gestating, but today's WWD announces that the store is finally finished. so we made it our business to check it out immediately, after all, two and a half years is a long time to wait.

We hardly recognized the corner of Spring and Greene Streets without the yards of plywood covering that had been installed there. What was hiding underneath was also barely recognizable. In fairness, the last occupant of the space was a deli, but you wouldn't know it, which is to Etro's credit. Though WWD reports the store as opening on Friday, it is, in fact, open at this very minute, and, according to its genial staff, has been since Saturday. Add it to the list of upcoming stores that couldn't quite get the paint dry before the end of Fashion Week, but their willingness to take their time rather than rush things is evident in the beautifully finished store.

The store's main floor is devoted to Etro's men's collection with a round table full of their iconic ties right up front. Variations of the label's signature paisley prints appear throughout the merchandise, as any Etro fan would expect, and a few colorful tweed sportcoats were pointed out to us as having been specially made for the store to be wearable in season for a February opening.

Downstairs, a more expansive basement has been finished to hold the women's collection, and though it is as summery looking as can be, there are still plenty of featherweight cashmere scarves to wear for the next few weeks. In fact, Etro serves as something of a counterpoint to Alexander Wang, SoHo's other big addition of last week. While Wang's store is all minimal sleekness housing an assortment of mostly black, hard edged romanticism, Etro spills over with colorful, bohemian romanticism, and it's hard to imagine that even those among us dedicated to a dour, monochromatic wardrobe couldn't be charmed by the eye popping color and pattern of Etro's prints.

Officially, we were told that the Etro family, which still controls the company, couldn't think of the proper concept for the space, and, since they owned the property outright, they simply sat on it until they figured out what they wanted to do. Ah the dream of owning rather than renting! Though we tend to suspect they were also waiting for the luxury retail market to perk up, this story seems plausible enough to us, and now that the store is open we can report that it was worth the wait.