More Barneys Markdowns
For This Weekend

Why Did Nicole Kidman Wear A Two-Year-Old Dior To The Oscars? 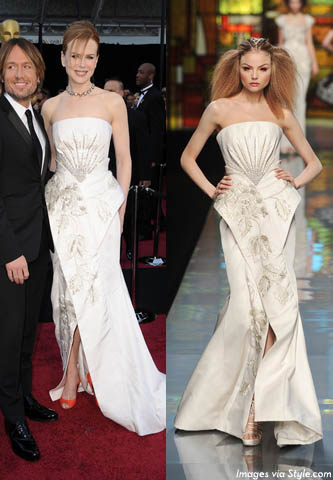 At this point, we all know the Oscars have become more of a fashion event than an awards show, and the red carpet arrivals are far more interesting than the show itself. There are a million people ranking who looked better than whom. We can't begin to enter that fray, and actually, nobody really looked terrible ...except for one person.

What happened to Nicole Kidman? Her white beaded Dior gown was ungainly and awkward looking, especially if you saw it from any angle other than straight on from the front. It was almost unianimously chosen by the innumerable fashion pundits as a major misstep. The strangest part of all: It was two years old! Kidman's dress was look #26 from the Spring 2009 Haute Couture Collection. Cate Blanchett's Givenchy and Michelle Williams' Chanel Couture dresses were both from the latest Spring 2011 collections (Looks #3 and #53 respectively, though Williams' was shown on the runway with an odd satin coat that the actress wisely discarded), and while host Anne Hathaway's white Givenchy was in fact from Fall 2009 Haute Couture (and, yes, it was shon as a wedding gown), she wore so many dresses, including new Tom Ford and Armani Privé, that it seems to matter less in her instance.

Designers and, more importantly, their public relations staffs are usually intensely careful about making sure their dresses are well represented at awards shows like the Oscars. It took only minutes after her performance for an email blast to go out notifying the world that Gwyneth Paltrow's onstage dress was right off the Michael Kors Fall 2011 collection runway. While we can attribute Kidman's (and her stylist's) choice as a matter of taste, we have to wonder why Dior would would have tossed a two-year-old gown to a major nominee often lauded as a fashion icon? It's not like anyone thinks she actually pulled it out of her own closet or anything like that. Especially considering the fact that Kidman herself was instrumental in promoting Dior designer John Galliano's first collection at the Oscars when she famously arrived in a green, chinese-style embroidered, mink-trimmed gown, wouldn't she have earned a bit more deference at this point? The house might not have seen this a blunder, but we can't see how it isn't. And, while they have bigger fish to fry at this very moment, wouldn't they have sent her some new dresses to choose from? Or at least some that looked better?