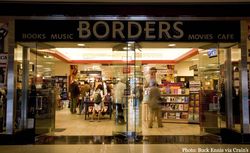 While Barnes & Noble's recent troubles have been in the news recently, its main competitor Border's isn't doing much better. It's January rent payments are being delayed, and Crain's is speculating that some if not all of the chain's nine New York City locations may soon become available. The midtown location at 57th street and Park Avenue has been available to sublease for some time, but it is a difficult configuration for most retailers. Other spaces, however, like the Time Warner Center and 2 Penn Plaza stores could be much more attractive to big-box chains. There's even a suggestion that the strip-mall-ish Kips Bay store could attract the newly aggressive, looking-seriously-at-New-York-again Walmart.

While you contemplate the decimation of every mom and pop store in Midtown East, sporting goods chains like EMS and Dick's are mentioned as the most likely candidates to take over, although we can imagine that Manhattan-obsessed TJX Companies (Marshall's, TJMaxx & Home Goods) already have their eyes peeled for some potential takeovers.