THERE GOES THE WAISTLINE: 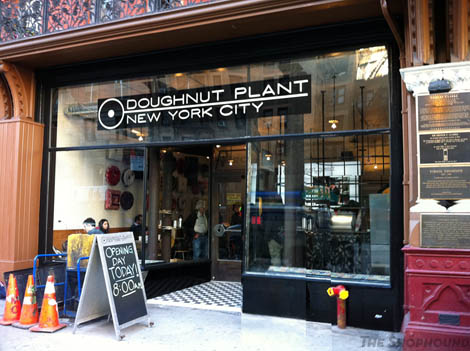 In case you think we have been totally immersed in Fashion Week, we're here to let you know some news that actually runs counter to the concerns of the moment.

Doughnut Plant is finally open in the Chelsea Hotel! In fact, it opened its doors only yesterday.

Yes, there was much hand-wringing over the emptying out of most ot the famed landmark's retail tenants, but we can't complain too much when their replacement is the best doughnut store ever.

And yet, we feel somehow ambivalent. You see, The Shophound was always comfortable with the temptation of Doughnut plant when it was safely tucked away only on the inconvenient Lower East Side. Of course, we could always pick up a few at Zabar's or Dean & DeLuca, but that's not nearly as irresistible as an entire shop of those treats with a full selection of natural, seasonal flavors. We don't actually live particularly close to Chelsea, but we find ourselves there often enough, and we aren't entirely comfortable with such temptation in such a convenient spot. We'll just have to consider it as a challenge to out willpower.
Starting tomorrow...
or maybe Thursday.