Lacoste + Malandrino
To Debut Next Month 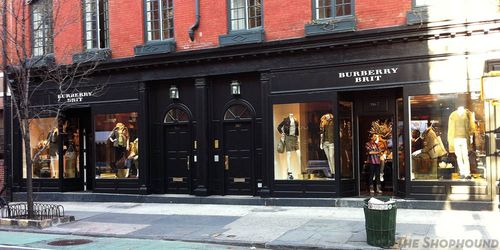 Well, let's start out with the obvious: We cannot get excited about yet another Burberry store in New York. The one that just opened on Bleecker street is the brand's sixth —or sixth and seventh if you count them as two mostly separate shops connected by a passageway in the back. They are faithful replications of what is now the company's boilerplate shop design, filled with the Burberry Brit sportswear line which is the most casual, jeans and t-shirts....ZZZzzzzzzz.

See what we mean? At this point, it's not so much that familiarity breeds contempt, just boredom. Burberry went to a lot of trouble to reposition itself from a prestigious but stodgy trench coat maker to a coveted luxury brand, but we have to wonder if such ubiquity doesn't undermine the air of exclusivity the company worked so hard to create.

As for Bleecker Street itself, it's far too late to complain about its transformation to a designer boutique row, but we could appreciate it more if the designer boutiques were interesting and unusual instead of the same, ever more predictable names we see all over the city.

I am disappointed in this article. Everyone in the neighborhood is very pleased not to have to go the very hectic and chaotic midtown to do shopping. The store also offers other product not just the casual "bland" pieces u speak about. They carry the traditional trench coats as well as accessories. There is also a service they offer in which u can hop onto one of their iPads in store and order anything company/worldwide free of charge to your home being they don't have your size or you're searching for something they don't carry. I had a great experience there and I enjoy the neighborhood luxury feeling.