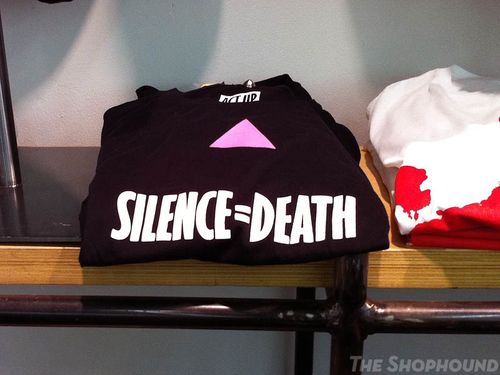 Anyone who was around New York City in the late 1980s and early '90s couldn't have missed the work of the AIDS Coalition To Unleash Power, better known as ACT UP.  Its group's activism reached a fever pitch during the early '90s, when the iconic black "Silence=Death" posters and t-shirts seemed ubiquitous downtown and served as somewhat more defiant symbols for the Gay community than the rainbow flags that took over to serve that role slightly later. The group sat not only at the forefront of AIDS activism but also played an important role in emerging LGBT visibility. However, as AIDS became more treatable and manageable and seemed like less of an emergency, ACT UP and its imagery slowly receded from view. Younger generations came of age without the memory of just how shocking and devastating AIDS was when it emerged.

So what were we to think as we wandered through Barneys Co-op in Chelsea yesterday when we spied a whole shelf full of T-shirts featuring ACT UP's famous imagery as if they were magically transported there from 20 years ago? We are pretty sure that these shirts didn't sell at Barneys during their original run, and we're also pretty sure that they didn't cost $50 either, but that's how much one will set you back today. The shirts have actually been reissued by the tireless team at Opening Ceremony in conjunction with ACT UP, and, of course, a portion of that price tag will go to the activist group (which, yes, still exists). Has the angry life-or-death struggle against AIDS from years past finally been co-opted into a blithe fashion statement, or will the images succeed once again as a potent reminder that AIDS is still with us and remains a threat to everyone's health? We suppose it depends on who is looking at and wearing them. You'll have to decide for yourself how you feel about their reappearance, but for The Shophound, they remind us that things have changed over two decades in many ways.