Galliano Pulled from Saks
...Except For Kids? 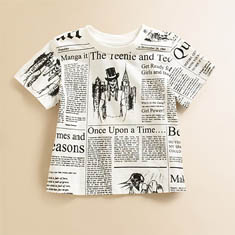 While all seems quiet on the John Galliano front for the moment,The New York Post has discovered that Saks Fifth Avenue has pulled whatever Galliano they were selling, menswear in this case, from the floor of its New York flagship. The Shophound's check of its website, however, reveals, as of this morning, 41 items listed from John Galliano's children's collection. What are the sales prospects of those items?

While Christian Dior has protected itself and its brand by disassociating itself from its disgraced designer, the label bearing Galliano's own name is harder to defend. While it's clear that the designer is out at Dior, the fate of the John Galliano brand seems somewhat more murky, especially since it is almost entirely owned by Christian Dior and has several licensing obligations that are presumably ongoing, and employs plenty of people who are not the designer himself. While continuing the brand with a new designer seems like a fool's errand at best, we have to wonder what will happen when Galliano, after much rehab and the inevitable mea culpa, wants to get back to work? If you don't think that this is possible, try to remember that the revered doyenne of French Couture, Coco Chanel enjoyed the privelige of living at the Ritz Hotel during World War II, had an affair with a Nazi Officer and is widely believed to have actually worked for the Gestapo. Her memory seems to have been long since forgiven for crimes far worse than Galliano's.

The Galliano website remains up and running, showing a video of the scaled back Fall 2011 presentation presentation which, interestingly, recalls many of the designer's pre-Dior shows. Dior has released little information about the future disposition of the brand, however dim its immediate prospects may be. Will the designer be reunited with his own label at some point in the furure, or will he be forever estranged from his own brand like Lacroix, Helmut Lang, Jil Sander and many other designers? This story may be on a hiatus at the moment, but it is far from finished.