DON'T CALL IT A COMEBACK: 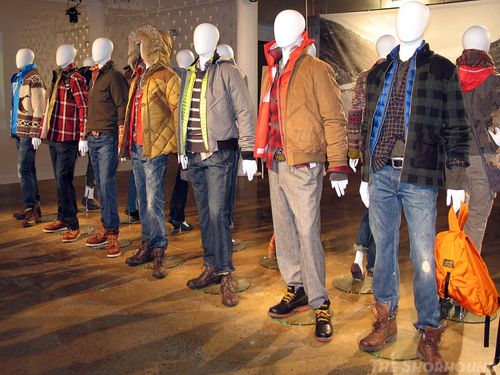 Last week, we told you that the eminent American outfitter Eddie Bauer was looking to return to Manhattan to show off its updated store concept, and so this week The Shophound made our way to Milk Studios to get a closer look at exactly what to expect from them.

The last time The Shophound was in an Eddie Bauer store was when the company was stuck in a bland moment, focused on middle of the road sportswear that could mostly be described as sturdy but style deficient. For much of the beginning of this century, the company was struggling with financial obstacles and lack of direction, but since then, the 91-year-old Seattle based company has been rescued by Golden Gate Capital which bought it nearly two years ago and has set about installing new management whose hard work is just beginning to bear fruit. The new company logo, which is actually based on its original logo, signals that this Fall will mark something of a relaunch for the brand's new point of view. It's certainly not a revolutionary strategy these days for a long-standing brand to delve into its archives for inspiration, especially when your brand's namesake invented that staple of the modern wardrobe, the down-filled jacket in 1936. That, however, doesn't mean that this wasn't the best strategy for the new design team to follow, and what we saw this week looked especially promising. 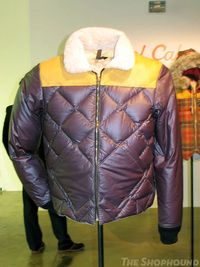 Eddie Bauer has switched its focus from the mall to the mountains, and has looked first to outerwear to revive its fortunes. No longer pushing generic puffer jackets, we saw all manner of hi-tech coats from thin, featherweight "MicroTherm" down filled layering pieces in jewel tones to newly updated vintage-style parkas. At the center of this focus was the first offering of a collaboration with British designer Nigel Cabourn (at right) which will be offered in select Eddie Bauer stores. New Yorkers, however, will be reportedly be able to find it at Barneys and Opening Ceremony, which should give you an idea of where the new design team's sensibilities lie. Cabourn has added his rugged touch to vintage archive Bauer parkas and vests that will sell for up to $1,500 for the explorer with unlimited resources. 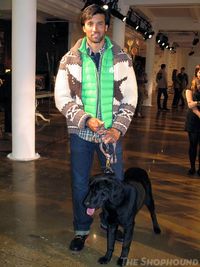 Aside from outerwear, the design team has also upgraded the men's and women's sportswear offerings, and though it hasn't been redesigned so much as to totally alienate current customers, A new flair is evident with exclusive Pendleton fabrics and custom colored denims. The women's line now includes a well priced jewelry collection as well as shoes and special items like distressed jeans inspired by Christine "Stine" Bauer, the original Eddie's wife. The men's line is marked by chunky handknits and rugged shirts in vibrant plaids that will fit right in with the continuing menswear fascination with authentic workwear. That rambunctious black Labrador retriever at left is Eddie, we were told, named after the company's founder. He was being led around by veteran model Ed McMahon who must have been roasting in two shirts, a down vest and a chunky handknit sweater, but still made it look appealing.

In addition to all the clothes, the company is also reviving and expanding its home division, which will include furniture made from repurposed wood accompanied by official documentation of the materials (below). Bedding and home accessories included more exclusive Pendleton blankets and a chambray quilt we were ready to take home with us. Children's Outerwear featuring cute min-versions of the new down jackets will also be reintroduced for fall, offering another lucrative avenue for the brand.

We left Milk Studios with lots of press materials and a gauzy wool scarf from the new collection that almost made us regret the warmer weather (almost). While we don't expect that New York City will have a full Eddie Bauer store open by this Fall, we know they're looking for space, and we wouldn't be surprised to see a new store here sooner rather than later. Now that we have seen what's in the works, we can tell that it will be something worth looking forward to.

Previously:
Returning Revamp: Eddie Bauer On The Hunt For A New Manhattan Home 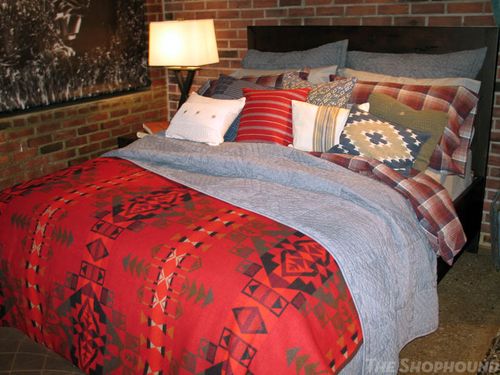