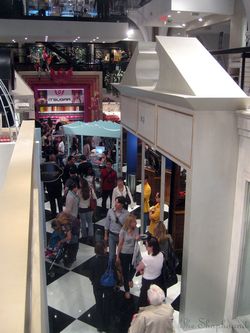 Nearly a year after its metamorphosis from nightclub to shopping destination, there are signs that Limelight Marketplace is struggling. The de-consecrated church on Sixth Avenue at 19th Street had little trouble attracting crowds after dark in its life as part of a glittering yet infamous worldwide chain of mega-clubs that opened its doors in the 1980s. Daytime shoppers, however, have been slow to materialize after an initial surge right after the reconfigured retail complex opened last May. Several high profile tenants including Hunter Boots and Le Sportsac, have exited their stalls, and those who remain have seen their business shrink during a time when it should be growing and gaining traction, according to Crain's.

Alex Yoo, manager of another departed tenant, custom shirtmaker Alexander West, tells the paper, “You don't know whether [Limelight] is a cheap, flea-market type of thing or a luxury-goods place,” an impression that can only be intensified by the structure's mazelike, multi-level configuration. Other companies fleeing their spaces reported difficulty in dealing with the Limelight management, but it would seem that the biggest problem was just getting people to come inside the doors as the building's landmark status limits the kind of signage that might attract more foot traffic. The very late arrival of Grimaldi's, the beloved Brooklyn pizzeria that only opened in February, has been a disappointment to tenants hoping it would drive traffic.  One also has to wonder if the location, surrounded by discounters like Marshall's, TJ Maxx and Men's Wearhouse and big box stores like Bed Bath & Beyond, Sports Authority and The Container Store, is really the best place for a quirky mini-mall filled with expensive gourmet food shops and small designers and apparel booths which are mostly hidden from the street?

Jack Menashe, who masterminded the project, promises that another transformation is under way as the space is being configured once again to refocus on apparel sellers with French Connection set to take space in the complex along with designer Edwing D'Angelo and Covert Shoe Lab as well as other apparel tenants yet to be named. In addition, next month is expected to bring a 4,000 square foot restaurant, Cross Bar, from Todd English. Menashe promises that the new tenants “will drive the local business and make the place hip and sophisticated.” Limelight Marketplace 2.0 is set to be completed by this August. Let's hope the tenants can hang on until then.

Posted at 09:46 AM in Chelsea, Disturbing Developments | Permalink | Comments (0)