Levi's Tells Us Its Story For Fall

Jean-Michel Cazabat Stakes Out A Dark Corner On Bleecker 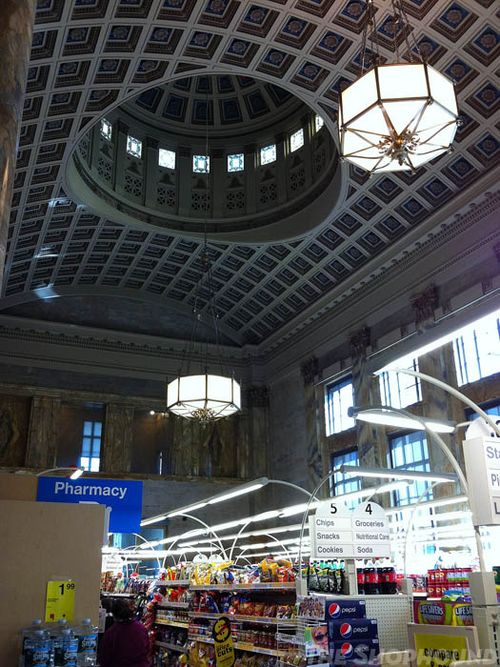 Not to be outdone by Duane Reade's marble clad store at Lafayette and Spring Street in SoHo, Giant drugstore chain CVS has taken its own former bank building in Chelsea and turned it into something of a temple to convenience and sundries.

It apparently took a while to find someone who would take over the historic building at the corner of Eighth Avenue and 14th Street that most recently held Balducci's ill fated New York flagship store. While one might have hoped that whoever moved in would have made the most of the building's majestic interior, like an upscale retailer or perhaps a chic restaurant, the space went to CVS. To the chain's credit, it appears that the store has done little to alter the actual interior of the main building, though its mundane fixtures do little to enhance it. Unfortunately, CVS does not share Duane Reade's newfound care for store design. The metal shelves and fluorescent lights seem to exist in spite of their lavish shell rather than along with it. The building dates from an era when banks were built to represent wealth rather than fast-food counters (yes, we are talking to you and your hideous red and yellow signs, Wells Fargo). It doesn't appear that CVS has done any lasting damage to the building (other than to its dignity) but, hopefully, one day the structure's gracefully arched coffered ceiling and majestic rotunda may cover something more befitting such a sumptuous setting.

Previously:
Does Your Local Duane Reade Look Like This? Part II