In Which We Go To
The Parsons BFA Fashion Show 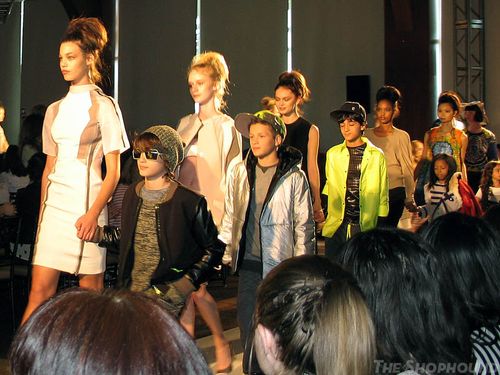 Yesterday, The Shophound went to the 2011 BFA Fashion Show for Parsons The New School for Design. Aside from the seasonal Academy of Art University show at Mercedes Benz Fashion Week, which is slickly produced and heavily edited, we had not really been to a full student show, and they are something entirely different from a working designer's seasonal show. It's always interesting, and occasionally dismaying, to see the work of promising students who have the chance to design without the kinds of commercial requirements and pressures that designers usually face. After all, if your continuing business depends on solid orders from Saks, Nordstrom and Neiman Marcus, you might think twice about sending three models down the runway in exquisitely embroidered, but flimsy wisps of silk that left them essentially naked except for their flesh colored thongs. One day, this designer will discover that even the most stylish, adventurous fashion-loving customers will eventually still need something appropriate to wear to a Bar Mitzvah, but for now, no such concerns disrupt the design process.

The other thing worth noting, is that such shows feature selections form every graduating student, of which there are 34 this year, so that with well over 100 looks, it's really more like three or four normal sized shows all mashed together. And when we thought the long show was over, we were faced with faculty speeches and a presentation from Parsons alum Reed Krakoff, and then another full length show of more designers. By the end, we were a little crosseyed and dizzy which wasn't helped by the pounding, super-loud soundtrack. Here's what else we learned:

There are apparently only two color schemes for students: Black, white and beige-y neutrals or a mélange of jarring colors which bring to mind toxic chemicals.

Parsons students have lots of inventive ideas, and despite the years of design advice we have all absorbed from Tim Gunn from season after season of Project Runway, some of them can't help themselves from putting all of them into one single outfit.

The students showing cover all apparel categories including Men's Women's and Childrens clothes. We're not sure that starting the show with three children's designers in a row is a great way to get things going, although we think this might have been done because those adorable child models are not such fast walkers and they wanted to get those sections out of the way. Ironically, the actual children's clothes were among the most charming and appealing offerings, perhaps because the designers were freed from the urge to be provocative or sexy. Of course, the first finale (there were two) gave us the odd sight of tall, grown-up models walking the winsome kiddies down the runway side by side.

As diverse as the women's looks were, the men's all seemed to suggest that Military Goth looks aren't going anywhere anytime soon. In fact, if the designers of tomorrow have anything to say about it, it will be going mainstream in a big way.

In fairness, the offerings ranged from outlandish runway pieces to a few mini-collections which really could have walked right off the runway to a rack at Barneys, but a solid hour or more of runway show made us punchy the way any type of graduation ceremony will. The Shophound is used to taking these things in 10 to 20 minute doses, and even those can get tedious. With 34 designers, we could barely keep track of the ones we liked the best, and would hate to mis-identify the one who made the looks ingeniously detailed with feathers (Claire Consani), the elegant black flapper shift with the delicate beaded cage overlay (Esther Lee) and the crisp, almost minimalist black tunic with the white architectural collar (Charlie Leibel).

There was a time, only a few years ago when designers Zac Posen and Jack Mc Collough and Lazaro Hernandez of Proenza Schouler were plucked right from design school to start their own labels to much publicity, bypassing the normal route of getting experience by assisting a more established designer. The economy seems to have put a stop to that sort of thing (which may be for the better), but if anyone is worried that there is a lack of creative minds on the scene, the Parsons show suggests that Fashion's future will be in good hands.