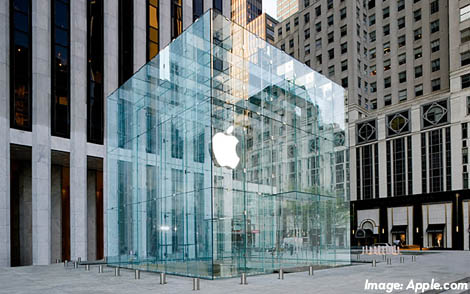 Visitors to Fifth Avenue's flagship 24-hour Apple Store are being faced with scaffolding surrounding the iconic glass cube that serves as the store's entrance. Reportedly, Apple is dismantling the famous cube entirely and rebuilding it as part of a program of upgrading the surrounding plaza area. Nobody is quite sure of the exact reason for the expensive construction project, or if the cube will be simply replicated or rebuilt in a new, updated version. There is no indication of structural problems that we are aware of, but the cube is temporarily coming down nonetheless, and for the time being, tourists will be without one of the city's most photographed structures.

UPDATE:
AppleInsider has some photos HERE. Looks like it'll be a Sumer of ugly plywood in front of the GM Building.