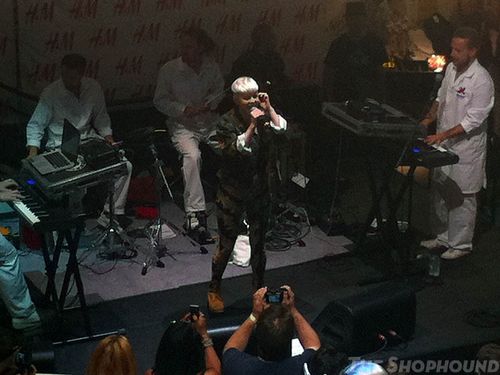 Swedish singer Robyn performed for a devoted crowd of hard core fans yesterday at Fifth Avenue's H&M flagship in a mini-concert that was originally billed as "secret" until some of us figured out what was going on. Clad in a brightly printed jacket and leggings with bouncy platform Timberland-ish boots and her cropped platinum hair brushed forward, the pixieish pop star declared to her audience that the appearance was the highlight of her week, which might be hard to imagine considering that she is currently touring with Katy Perry and slated to appear at England's Glastonbury Festival later in the week, but if she was fibbing, she sold it well to her adoring fans.

Though there was a respectably robust crowd, since Robyn is, as they say, "bigger in Europe" the store was not quite as packed as it would have been if, say, Rihanna had shown up or if the H&M store were in the middle of Stockholm instead of Manhattan. While there was a group of die-hards who showed up hours early to ensure a good viewing spot, anyone could have easily wandered into the store mid-performance, and many did. Perhaps due to her just-under-the-radar status, there were no tweens to be seen. Her American fan base appears to be relatively grown up including —no surpises here— bunches of gays. Robyn looks to be well on her way to supplanting Kylie Minogue as the thinking gay's foreign born dance-pop star of choice, or at least moving up right alongside her.

But back to the show, though music criticism is not generally The Shophound's bag, we can report that Robyn indeed sings live sounding as good as if not better than her recordings. Instead of backing tracks, she brought along a four-piece combo whose drums and keyboards filled H&M's three-level atrium with electronica. Her faithful fans easily handled the backing vocals for her biggest hit, "Dancing On My Own" with no prompting whatsoever, and, overall, it seems like you would have to have been basically dead inside not to have been at least charmed by her energy and talent. Though the vocal crowd chanted for one more song, they quickly realized that demanding an encore was perhaps a bit much to ask at a free show, and Robyn had to make time for the CD signing that followed. Then after racks returned to their normal spots, the glamor faded as H&M slowly returned to its normal Sunday afternoon business.

Previously:
Who ROBYN Is Performing At H&M's Fifth Avenue Flagship This Sunday?