Ghurka Escapes The Plaza
And Heads For Fifth Avenue
UPDATED 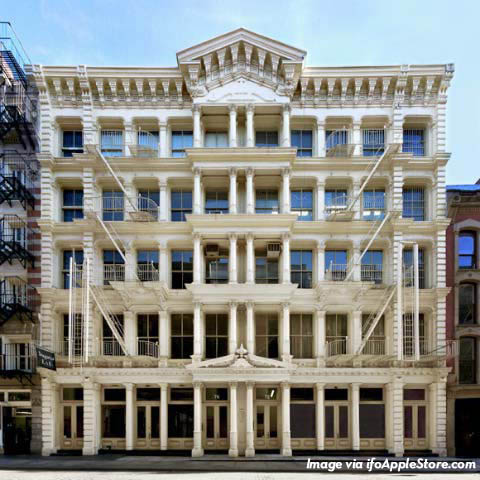 It's like someone turned on a spigot and the news about Apple stores keeps gushing out. While we were all digesting the news about Apple's upcoming store in Grand Central Station, AppleInsider discovered that 72 Greene Street (pictured above) will be the site of a temporary store in SoHo to replace the Spring Street Apple unit while it undergoes renovations and expansion.

With some additional work from ifoAppleStore.com (There's a whole cottage industry of Apple blogs out there) the tireless bloggers combed through building permits to conclude that the retailer would take over both ground floor retail spaces, the cellar and half of the second floor at the historic 1873 cast-iron, French Renaissance style building between Spring and Broome streets that sits about a block and a half from the former post office building holding the store set to go under construction within the next few months. This presumably means that King Of Greene Street, the boutique in one of the ground floor spaces that was named after the imposing building's longtime nickname, has closed, which, sadly, we hadn't noticed. The bloggers deduced who the renovating tenant was by matching the architectural firm cited in the documents with one which has frequently worked for Apple in the past. The most striking feature is the price tag on the store. Apple will be shelling out $1.4 million to alter and use the space for only a few months. When it will make the move is unclear, but all signs point to a mid-September launch for the newest iPhone, so we are guessing that the temporary replacement store will be up and running in plenty of time to prepare for that particular bit of rabid customer frenzy. As for Grand Central, The Wall Street Journal's Metropolis blog has renderings of the upcoming store in the main terminal there courtesy of MTA officials who also announced that the historic station would also be welcoming a Shake Shack (Let's just move in there permanently, shall we?). The officials reported that the store would take only four months to build, which suggests that Apple will be making few if any architectural additions or changes to the existing landmarked structure and that it will be open in time for Holiday shopping. In addition, the Journal estimated the annual rent of the space up to $1.1 million —higher than earlier estimates— which would be on top of the $5 million it reports the company paid Chef Charlie Palmer to shut down his Metrazur restaurant more than eight years before his lease would have expired. Palmer, in stark contrast, was only paying $263,997 a year for a somewhat smaller space. This means that the MTA more than quadrupled its income for the space plus a portion of the balcony which had not been previously rented. It's no wonder that they were so eager to strike a deal with Apple.

And that's this morning's New York City Apple retail update. If things keep going the way they have been, we may have a whole new bunch of news by this afternoon 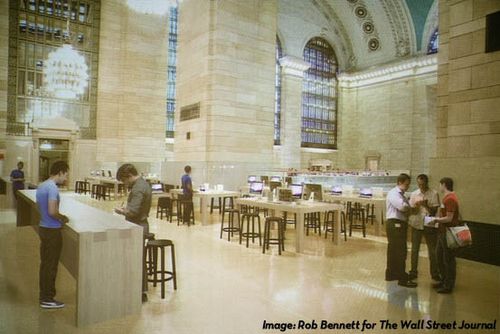