A Word About The Crowds At The Alexander McQueen Exhibition 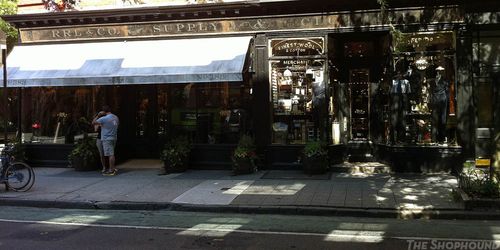 We weren't expecting much news from a sultry July Saturday stroll down Bleecker Street, but leave it to Ralph Lauren give us some good material. His retail division has been even busier than we though reconfiguring his network of Manhattan stores. The new RRL store that took over his previous Men's and Women's Collection stores has opened. In fact, the complex remains two separate stores, but at least there seems to logical reasoning behind that. The larger store on the corner of Bleecker and Perry Streets carries the current incarnation of the RRL brand. After a rocky start in the '90s, RRL found its groove when it was recast as a premium denim collection with a rugged western edge. Now freed of its hyper-cluttered space up the street, the sportswear collection can be shopped without the inevitable likelihood of bumping up against other shoppers or the store staff. Not that there isn't clutter —it is Ralph Lauren after all— but there's more room to breathe, and the former women's store's extensive cabinetry has been scaled back and stripped of its pristine white paint. Another welcome discovery is the expansion of the RRL shoe line, which started last year with a couple of sturdy boots made in the U.S.A, and has been expanded to a full, domestically produced collection clearly aimed at Red Wing's and Wolverine's rabid fan base.

But what about the other shop? Since the two side by side spaces have not been joined into a single store, the former men's shop is now where Lauren is debuting a new Italian-made tailored clothing line under RRL's label. Hard finished woolen fabrics have been fashioned into suiting separates with generous 1940's style lapels and deeply pleated trousers. Patterns can be mixed and matched depending on how committed one is to the look. Though the pieces are finished and treated to look like they have been plucked from a vintage store, or better yet, rescued from a decades old trove of dead stock, they don't come cheap, with a suit easily topping $1,200 before you even add the only slightly optional vest. There are dress shirts and ties 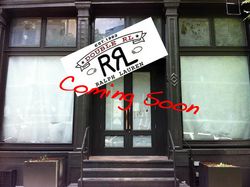 with the same rumpled patina available as well, along with an abundance of vintage shoes and accessories for those determined to dress just like Elliott Ness or Spencer Tracy. Lauren isn't quite finished with expanding his RRL presentation in the city yet, however. That Collection store at 379 West Broadway in SoHo that he ditched for more evocative digs on Prince Street is set to be converted to an even bigger RRL store. According to the Ralph Lauren website, it's "coming soon".

But that's not all, folks. There's still the smaller space on Bleecker left empty from the RRL move (below). It is going to be made over into a Rugby store along with what used to be the Ralph Lauren children's store down the street, one presumably for each gender. They will be the city's second and third for Lauren's more "collegiate" line after the main location on University place just south of Union Square. They should do quite well on Bleecker with the folks who shop at Gant Rugger and Hilfiger.

So, you see, they have been extra busy moving stuff around over at Polo Retail Headquarters. We almost feel like we will have to check around town to make sure that the rest of his stores are the same as they were a few weeks ago. After all, that NoLita RRL store space is bound to be turned into something else once it moves to West Broadway. 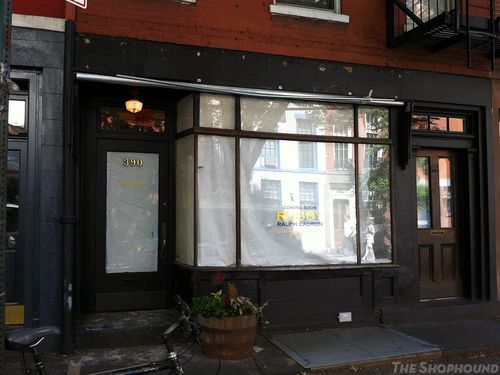