In Which We Discover Ralph Lauren Blatantly Knocking Off Maharishi 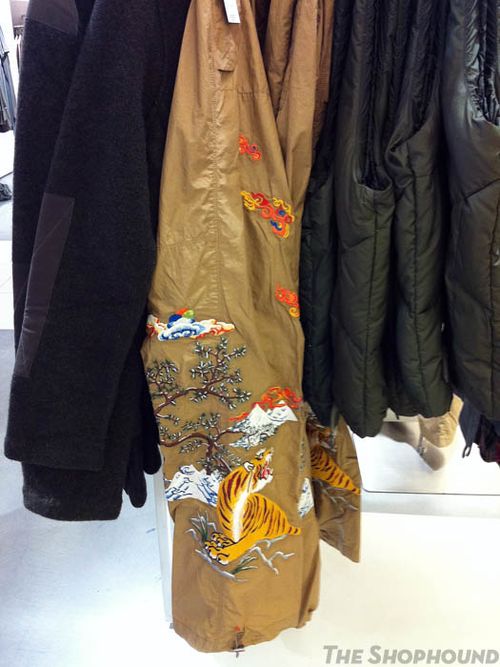 So, the other day, The Shophound was wandering through Bloomingdale's on 59th Street to see of there was anything worthwhile remaining of the last Summer markdowns when we noticed the lavishly embroidered pant you see above. We thought, "Oh, look. Bloomingdale's is carrying Maharishi now."

Many may know Maharishi as the London based sportswear line that gained a cult following by festooning military-style clothing with bright Chinese-style embroidery. At the time the label reached its peak —the late 1990s and early 2000s— it was an unlikely and charming combination. For a time, the label was a mainstay at Barneys and other similarly influential retailers, but after a while, shoppers moved on to other brands, and the label became less visible in such stores. Unfortunately, the style spawned many unfortunate imitators who copied the brand's ideas with less finesse (culminating in the hideous cacophony that is Ed Hardy), but somehow, the originators always seemed to get the look right.

Imagine our surprise when we took a closer look at the pants before us and discovered that they were not from Maharishi at all, but RLX, Ralph Lauen's high-tech athletic line.

Now, Ralph Lauren has been accused of copying things for most of his career as a designer, and most of the time he probably wouldn't argue. His inspirations, however, tend to include the classics whose origins are decades in the past, or vintage items that are lovingly adapted for modern consumption. You can't fault someone too heavily for trying to reproduce the elegant line of Cary Grant's suits if nobody else is making them, and it goes without saying that he has found an enormously receptive customer base for his products, but Maharishi is still very much alive and in operation. While the RLX pants are probably not a direct copy of a Maharishi embroidery, the concept is clearly lifted wholesale from the British company. Compare the images below (click to enlarge). On the left is the RLX "combat pant" taken from Ralph Lauren's website, and on the right is a current offering from Maharishi, the signature "Original Dragon Snopant", virtually unchanged from the version The Shophound picked up in 1999 from Ron Herman at Fred Segal on Melrose in Los Angeles (at the very least, you can say they are consistent). Over the past 15 years, they have produced their signature "snopants" with innumerable different embroidery designs, and it has become the brand's flagship item.

So you decide, copying or "hommage"? We know where we stand. On the plus side, maybe this means its time to take our Maharishi pants out of the "Archives" closet and put them back into rotation. 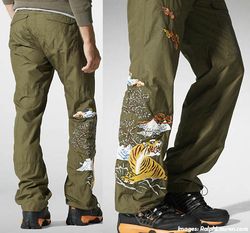 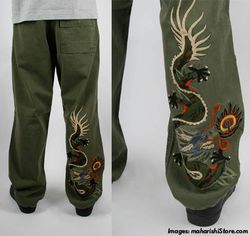