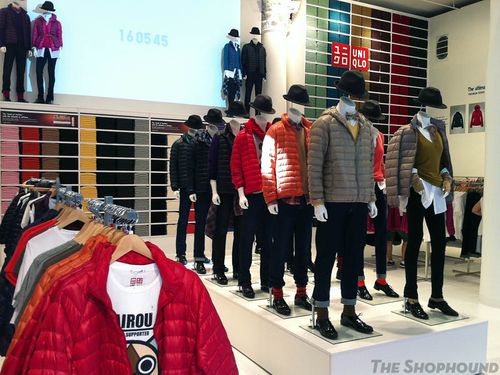 UNIQLO has a big Fall season coming up with the launch of not one but two major flagships in Manhattan. Such activity requires plenty of advance publicity, and you have probably heard of the Uniqlo-sponsored roller rink that opened last month at the foot of the HighLine. 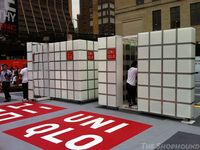 That project includes some cleverly designed, pre-fab pop-up shops (at left)featuring cashmere and t-shirts in sleek but slightly cramped booths. They might not seem so pleasant to browse in on a steamy August day, but if trekking to Tenth Avenue for roller skating in the hot Summer sun is not quite your cup of tea, then your patience will be rewarded soon enough. The Japanese-based chain is opening three pop-up stores to re-promote itself to New Yorkers, one in the Flatiron district, and two more on the Upper West Side. 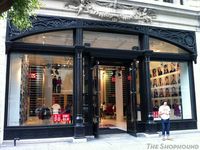 The Flatiron unit (above and right) just opened its doors this past weekend at 155 Fifth Avenue between 21st and 22nd Streets. After having spent several months as a Harry & David shop, the space has now had a minimalist whitewash and been filled with a capsule selection of Uniqlo's signature cashmere, denim, t-shirts and their latest lightweight down-filled jackets and vests. It's a little tough to start contemplating the chain's HeatTech innerwear on a muggy 85° day, but we saw customers buying those down jackets already when we stopped by over the weekend.

We don't quite know why the company seems to be ignoring the East Side, but West Siders will be graced with the other two pop-ups within a couple of weeks. One will be placed near Columbus Circle on Broadway between 61st and 62nd street, while the other will open 26 blocks uptown between 87th and 88th Streets (both pictured below) not far from Club Monaco, Banana Republic and that most direct of the chain's potential competitors, the Gap. We'll have to wait and see if the other stores will have the same merchandise mix, but with the two flagship stores set to open in "early" and "late" fall, we can only expect Uniqlo's PR efforts to get ramped up as the season rolls on. To keep up with the activity, the brand has created a special "UNIQLO NYC NOW" web page which tracks the various events leading up to the opening of the two permanent stores. We have weeks to go until then, so check in there for more events and activities, and, in the meantime, enjoy the pop-ups for however long they last for the rare experience of crowd-free Uniqlo shopping.