Marni Is Closing The Gap On Gansevoort 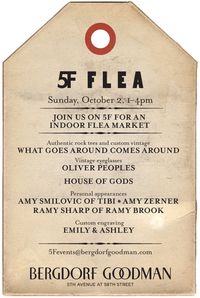 It really has become a full time job to keep track of the various Flea Markets around the city. There are the longtime favorites in Manhattan, the hipper, cooler ones in Brooklyn, and even the artisanal-and-heritage-brand-centric Pop-Up Flea, which we hear is returning this Fall at a date to be announced.

It was inevitable that someone more established would latch on to the idea, and this Sunday, Bergdorf Goodman will host the "5F Flea" on its fifth floor from 1 to 4 PM. The event will feature vintage tees from What Goes Around Comes Around and House of the Gods, vintage eyewear from Oliver Peoples, personal engraving from Emily & Ashley, pendants and palm readings from clairvoyant jewelry designer Amy Zerner as well as special appearances from designers Amy Smilovic of Tibi and Ramy Sharp of Ramy Brook.

We're not really sure that it will replicate the experience of the city's more eclectic, exciting flea markets, but you could do a lot worse than shopping Bergdorf's fifth floor on any day. While we're sure that some hipsters will bemoan the way the Fifth Avenue luxury store has co-opted the whole flea market concept, you could probably make a good argument that New Yorkers have co-opted flea markets to the point that some of them are now as expensive as shopping at Bergdorf's.