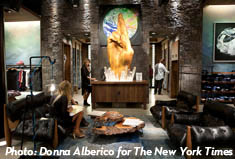 Today's Critical Shopper in The New York Times finally makes her way to Canadian-based chain Aritzia, which opened last Spring. Alexandra Jacobs doesn't find the their merchandise nearly as compelling as their uncommonly attentive staff and dressing rooms which are frustratingly mirror-free, forcing customers out into a communal fitting area to appraise their choices:

“Key-oot,” was the most common refrain bouncing around this — well, this hall of mirrors.

The plentiful personnel of Aritzia, however, were as sweet as maple toffee, to each other as well as their clientele. “Honey!” they could be heard cooing. “What do you need help with, Malia? ... Corinne, do you mind helping Malia out? ...”

So, even if you are not knocked out by the store's inconsistent "something for everyone" fashion direction (one house label, Wilfred, is described as "sort of a mirror-world Banana Republic". Yikes), the collective warmth of the staff will likely nudge you into a dressing room anyway, but Ms. Jacobs seems to think that in the midst of H&M, Zara and Uniqlo, not to mention Scoop, Bloomingdale's and Intermix, Aritzia seems to be coasting on its enviable location and effusive service rather than offering any irresistible must-haves.