Century 21's Upper West Side Store
Is A NEW Century 21 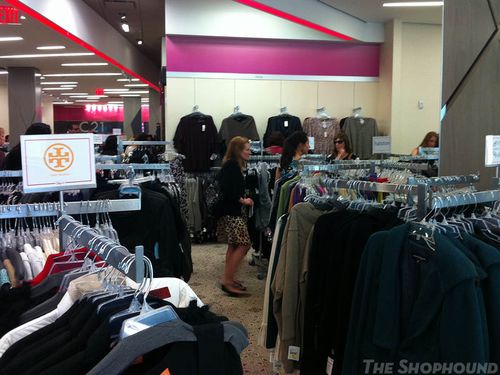 As we reported last week, the New Lincoln Square Century 21 is open today, but only if you have a gray VIP rewards card to show them at the door —and they are serious about this restriction. Of course, The Shophound, discreet fan of off-price shopping that we are, has just such a card and when we breezed in at around noon today, we found a Century 21 most unlike the Financial District flagship we have become so accustomed to over the years.

The old Barnes and Noble has been completely gutted (except for those annoying multi-directional escalators) and been refitted with a specialized decor of fractured brushed steel and zig-zagging red lights. It may not be your cup of tea,  but the fact that there is any decor at all makes it a departure from the downtown store.

The place is tidy and organized. Who knows how long this will last, but the merchandise is not crammed onto racks willy nilly as one might expect, but reasonably well taken care of and identified by label. The brands look good, and we saw signs for, among others, Dolce & Gabbana, Tory Burch, Michael Kors (both lines, merchandised separately), John Galliano, M.Patmos, Missoni, Escada, Halston etc. The women's shoe department is downstairs along with children's, so this being the Upper West Side, it was naturally a stroller gridlock, but we saw sections for Sergio Rossi, Martin Margiela, Clergerie and, yes, even Manolo Blahnik. The Shophound is unfortunately prediposed to notice only the most most luxurious and exclusive brands. The midrange brands sort of all melt into a blur to us (What can we do? Apparently that's just how God wants it), but it looked like there were plenty of those too, like Jessica Simpson or whatever...
Also, it must be noted that we have never seen such a solicitous sales staff at Century 21. Would it be too cynical to suggest that it might be because the place is crawling with store executives? Oh, come on. There's no guaranteeing how long everyone will be on their very extra-best behaviour, but for the moment, it's quite pleasant to have a cashier so meticulously fold and package everything and make sure we got our free tote bag (the good canvas kind that are excellent for greenmarkets and groceries). Will everyone be so delightful two days before Christmas? Probably not, but at least they know where the bar is supposed to be set.

Unlike a the downtown store, there are no housewares, bed & bath, luggage, or much of anything that's on that lower level. This store is big, but not that big. Cosmetics is also missing. Since it's a smaller store, the assortments are also smaller. In some ways, that's a good thing because the selections downtown can often be overwhelmingly vast, but that means that there is not quite as much of the things we love in the scheme of things. In stocking the store, Century 21's buyers have been more focused, so there are fewer of the random offbeat items that can be real finds and instead more of the familiar labels on the racks. Perhaps there is only so much of that sort of thing to go around, but we missed that rack of Woolrich Woolen Mills samples we always seem to find, or those designer pocket squares.

Still, we were sufficiently impressed by the new store to pick up a Polo black silk knit tie for under $20 along with a Tom Ford cashmere and silk scarf that was somewhat more than $20, but still an excellent buy.

The "soft opening" will be in effect through Sunday, so if you don't have a VIP card, you can presumably get one downtown or at one of the other branches. It's worth it if you want to enjoy the store without the masses who are sure to descend upon it when the door policy opens up to the general public.