DOWN BUT NOT OUT:

Blush Bows Out
But Hangs In On Bleecker Street 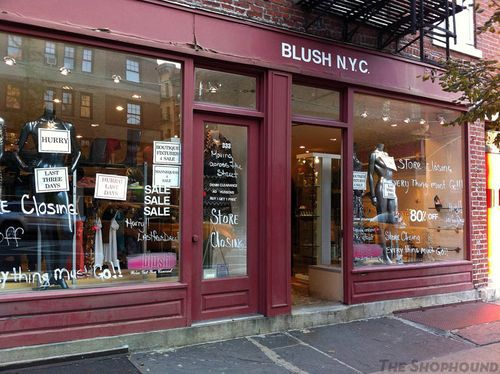 Weekend visitors to Bleecker Street found one of the last remnants of the street's past as a neighborhood shopping street in the throes of closure. Blush, a women's boutique commonly described as "funky" is shutting down at 333 Bleecker Street between Christopher and West 10th Streets, but claims to be moving just across the street. What's remarkable is that while most of the independent boutiques that have been evacuated from their precious homes on Bleecker have never been heard from again, this one is relocating, apparently, on the same street. The fact that Blush has lasted as long as it has may be a result of a well-timed lease. In reading online reviews of the store, however, we discovered customers consistently describing the staff as "pushy". Surprisingly, this was not always a criticism (though it wasn't much of a compliment). Perhaps an aggressive sales staff is what an independent store needs to survive in such a valuable location.

Is Blush the kind of tenacious little store that will survive the street's transformation from neighborhood shopping to luxury? Time will tell, but its having found an alternate space on Bleecker speaks well for its survival. We're not exactly sure which space it is moving into, but the bigger question now is what big name (and it's sure to be a big name) will be moving into the prominent storefront at 333 Bleecker?