Eddie Bauer Charges Ahead With
A New Look for Spring

UNIQLO Parties In A Big Way 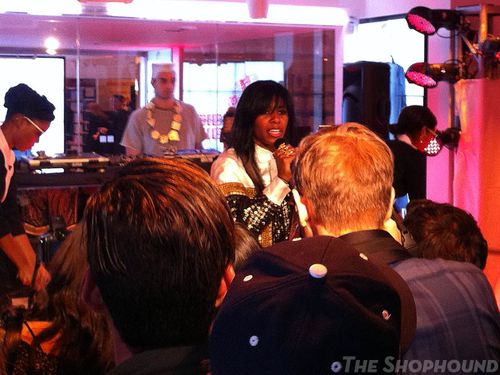 So last night, months of escalating publicity and promotion came to an apex as UNIQLO threw a big opening party to launch its immense, new Fifth Avenue Global Flagship which finally opens its doors at noon today. And boy, it was big.

The last time Uniqlo threw such a bash, it was almost five years ago, and most people weren't quite sure what this big Japanese store opening in SoHo was all about. They do now, even though this is still only the company's second store in the United States (with an only slightly smaller third one on deck to open in a week's time), and the event attracted an impressive crowd eager to celebrate with free flowing Sake-tinis. Well, everyone's always eager to celebrate with an open bar, but among the revelers we counted major retail figures like Saks Fifth Avenue president Ron Frasch, designers like John Varvatos and the Costello-Tagliapietra team who have had two well received collaboration collections with the store and other fashion crowd mainstays like Lorenzo Martone and stylist Robert Verdi.  Those who were at the previous launch would still recognize the traditional sake barrel breaking. This time, Uniqlo founder Tadashi Yanai did the honors with actress Susan Sarandon, who is starring in the company's "Made For All" campaign. In fact there were sake barrels throughout the store and the beverage was once again served not in glasses, but traditional little square wooden tumblers (We skipped the sake this time for a crisp basil lemonade with vodka).

Though there was an enormous crowd, the store's 89,000 square feet accommodated everyone nicely, and the vast space was well used with lots of bars everywhere so nobody really had to wait too long for a drink —truly the mark of a well organized event. Even so, with in the huge space it still took a god bit of texting and instructions for The Shophound to make contact with a friend who was also at the party. The production was turned over to nightlife promoter Josh Wood who did not disappoint with the entertainment choices. We would happily brave a crowded party and more to see one of our very favorite soul singers, Brooklyn's Sharon Jones who was backed not by her usual band but the Vanguard Jazz Orchestra. Wood also brought in Santigold (pictured above),who performed two songs —though we're still not totally sure she actually sang them— and LCD Soundsystem's James Murphy, who DJed.

The up-only escalators were running both ways for guests at the event, so as we made our descent and exit we were presented with a special white nylon tote printed with Uniqlo logos in its own zip pouch. Ok, last time we got cashmere scarves, so this was a teeny bit of a let down, but we recognize that in this day and age, it is churlish to bitch about party swag (and The Shophound already has plenty of scarves). That doesn't usually stop us, but considering the size of the guest list, we're not terribly surprised that the gift bag was somewhat more humble. The real prize comes when the store finally opens today. If you can make it through the inevitable crowds, you might be able to get ahold of the $9.90 jeans. We wouldn't blame you for waiting a couple of weeks for the hordes to thin out, though. If there's one thing this store tells us, it's that Uniqlo plans to stick around for a while in a very bg way.