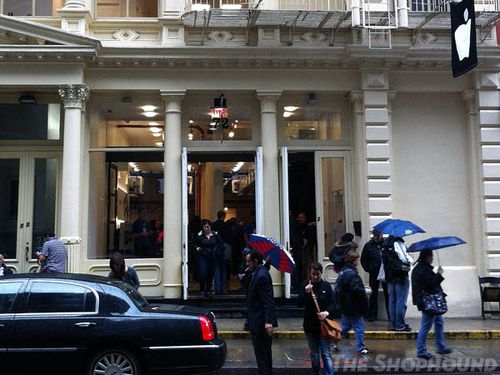 After hearing months ago that Apple would be temporarily be moving their SoHo store to 72 Greene Street, we were wondering when exactly they were planning to do this. Well, this past week, the company's longtime Prince Street store finally closed for a major renovation and expansion. 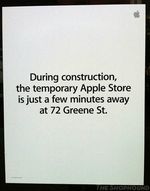 For however long that takes, customers will be directed a couple of blocks away to the temporary store. Having seen it, we now understand what took so long, because what Apple considers "temporary", looks for all the world like a perfectly permanent installation. Of course, for most markets, a roomy two-level Apple store would more than adequate, but for busy SoHo, we anticipate that it will be crowded most of the time, especially at Christmas. In fact, it was pretty bustling on a rainy Thursday afternoon. It has pretty much all the same features as the store it is subbing for except for the amphitheater —and we didn't immediately if there were restrooms (one of the Prince Street store's most popular features). There is indeed a genius bar, and all the other usual services, but given the inevitable crowd crush that comes with a recent iPhone launch combined with the upcoming Holiday shopping season, we might suggest that regular Apple SoHo customers might do well to venture up to 14th Street and Ninth Avenue for an easier shopping experience.