EVENT OF THE WEEK: 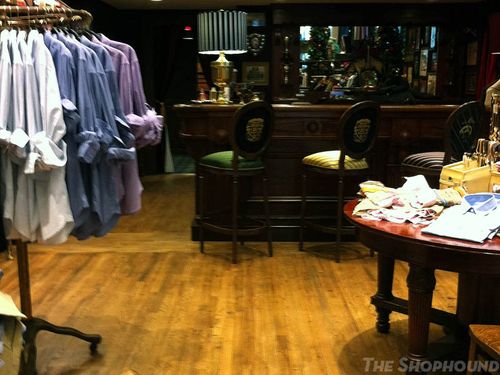 It would be the worst possible timing for a store to open its doors just as its building is about to be covered in scaffolding, but that's what has happened to Brooks Brothers' Flatiron Shop, its seventh Manhattan store, which opened its doors over the weekend at Broadway and 20th Street. We peeked inside last week as the store's finishing touches were being put in place, and the store has been made over to resemble a posh fraternity. Think more Porcellian Club than Animal House. 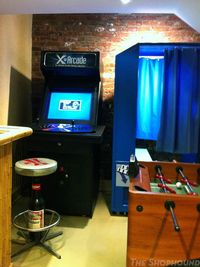 Upstairs is all dark polished wood with a register counter that begs to be stocked with scotch and bourbon. The upstairs loft has been turned over to serious lounging with a giant television, while the basement is where the party would happen with a foosball table, arcade games and that retro-amusement du jour, a photo booth. All that's missing  are a few red Solo cups tossed around from last night's kegger. Of course, all this Ralph Lauren-level art direction is meant to serve the merchandise which is mostly edited to focus on the brand's younger "collegiate" label, identified by its enlarged, slightly exaggerated version of Brooks Brothers' classic tag. Women's is on one side of the store, but Men's gets the emphasis with the fixtured wall  and the general old-boy atmosphere. While the merchandise looks like typical Brooks Brothers fare, the khakis are the narrowest cut, and most of the shirts are slim or extra slim cuts rather than the voluminous oxford button-downs that Brooks is famous for. Even a classic gray suit is a trim, Mad Men-esque version instead of the classic Brooks sack.

So it's preppy with a hipster silhouette at this new boutique-sized Brooks Brothers, so clearly meant to be seen as a college shop that it is even stocking sweaters and ties festooned with the NYU insignia in place of the brand's signature golden fleece. The bright-eyed, perfectly styled staff seems plucked form the freshman class as well, and what they may lack in seasoned experience they more than make up in eager loquaciousness. Eventually, they'll get the balance right. While it might look the store is aiming to compete with J. Crew and Banana Republic a block to the west, it seems to be more clearly taking a shot at Ralph Lauren's Rugby just on the other side of Union Square. After 44 years or so of Ralph Lauren borrowing liberally from Brooks Brothers, it's only fair that they take a little back for themselves... as long as they can just get rid of that damn scaffolding.