Looking At Spring 2012
From ASOS and Oakley

Here's What You Will Find At Housing Works Fashion For Action 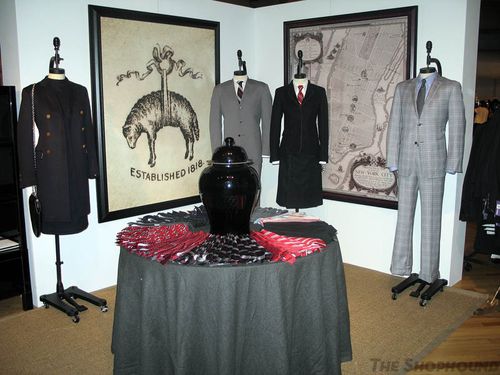 Housing Works takes a big step this year as its popular Fashion For Action shopping benefit finally outgrew the organization's Chelsea store and made the leap a couple of blocks away to the Altman Building. The Shophound got a sneak preview yesterday as the space was being set up for the VIP preview reception, and we can happily report that not only there is more new designer merchandise than ever, but the extra space will also make it much easier to shop. Essentially, for the next three days, the space will be transformed into a giant thrift shop with new, unworn merchandise, and, as if you needed to be reminded, all proceeds will go to Housing Works' continuing efforts to provide homes and services to people suffering from HIV and AIDS.

Because of the venue change, the reception and the sale were able to be held in the same place for the first time, and after having been opened for only a few minutes, partygoers got down to business, balancing hors'doeuvres and drinks in one hand and new purchases in another. We spotted co-chairs Patricia Clarkson, Thom Brown and Rachel Roy dutifully making their appearances along with many other fashion folk. The event wouldn't have been complete without at least one "real Housewife", and as if on cue, Alex McCord and her husband collided with the least gross member of Logo's "A-List" cast, photographer Mike Ruiz right in front of The Shophound. Luckily, there was no reality show implosion, and the party continued on. Feeling thrifty (or just tapped out from the recent round of sample sales) we left with a Michael Kors cashmere sweater and several Black Fleece cashmere socks all for around $100. 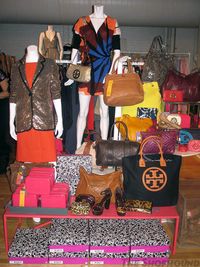 While the VIP party was arranged on two floors, the public sale, which starts today will all be set up the main level, and Housing Works' tireless staff will be replenishing merchandise regularly. We can't promise that all of the designer handbags and more special pieces will have survived the free-spending VIPs, who were enthusiastically loading their arms and shopping baskets with goods, but we can report that there is an enormous amount of new, unworn merchandise that should keep bargain hunters happy over the next three days. Thom Brown fans should be pleased again this year as Brooks Brothers has once again donated a massive trove of its Black Fleece collection for men and women (above) which is designed by this year's honorary chair. This time around, along with apparel from the label, there are women's shoes and plenty of accessories for men and women. The only disappointment we can report is that prices across the board are a little higher than last year. Instead of the 80% to 90% of thrift shop level prices, most goods are selling at around 50% to 70% off, which is still makes for plenty of excellent buys. For example, a pair of Black Fleece pants which we picked up last year for about $75 are now $150, though, some special (probably sample) pieces are still priced for impulse shopping. 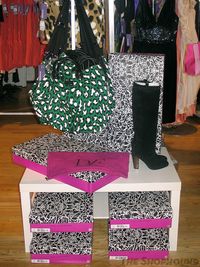 We spied a rack of samples from Thom Brown's own label which were all going for under $100 along with some special men's shoes designed for his runway shows. Almost everything has its original tag, so you can easily calculate savings. Other major donors include Diane Von Furstenberg, Tory Burch, Psycho Bunny, Kate Spade and Marc Jacobs who contributed goods from both his main collection and less expensive Marc line. They were all represented with major presentations at the VIP event. Downstairs, we saw packed racks for Ralph Lauren, Banana Republic, Edun, more Black Fleece, John Varvatos, Michael Kors, DKNY, Tommy Hilfiger, Timberland, Levi's, Dockers among many other labels who often gave full size runs of apparel to accommodate all shoppers.

The event runs through Saturday the 19th, but like all sales the best stuff goes fast. There's no admission for the public sale, so we recommend getting down there as soon as you can, keeping in mind that its all for a good cause.

Posted at 10:57 AM in Chelsea, SALEsaleSALEsaleSALE, Special Events | Permalink | Comments (0)