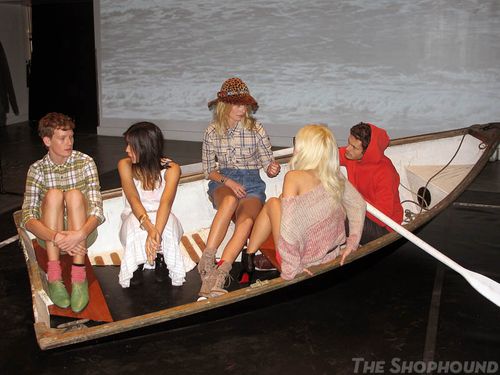 Spring Previews are still coming fast and furious from brands that don't need to be bothered with the New York Fashion Week circus. In the past couple weeks, The Shophound checked out Levi's and its newly revitalized little brother Dockers as well as a new Australian line you won't find in New York City. 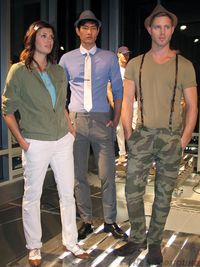 Last week, we headed over to West Chelsea, ground zero for these sorts of events, to se what was going on with Dockers. In all honesty, had this been a couple of years ago, we would only have been lured there by the promise of an open bar, free hor d'oeuvres and a lively DJ set from The Roots' ?uestlove, but suddenly, the brand credited for the shapeless chinos that gave Casual Fridays a bad name is doing collaborations with Steven Alan and GQ's Best New American Designers, a group that includes winner, T by Alexander Wang, and runners-up Patrik Ervell, Gant by Michael Bastian, Miller's Oath, Warriors of Radness, and Riviera Club. Suddenly, Dockers is kind of a cool brand, or at the very least vastly improved on the style front. Last week's preview was focused and well edited, highlighting slim, tapered khakis that gave a lift to the classic sportswear looks. There were reversible shorts, updated fitted shirts, and even the cargo shorts looked trimmed down and sleek. We're guessing that those camouflage printed khakis (pictured right) will sell out fast, so put in your orders early. For taking the trouble to go out on a stormy night, we were presented with a pair of Dockers' new slimmed down Alpha Khakis. 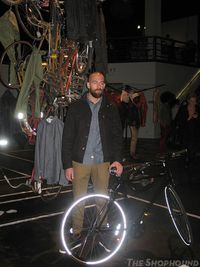 This week, we headed over to Stage 37 to see what Levi's has in store for us for Spring. This season, the legendary denim brand ramped up its presentation production values in the cavernous studio. Models casually moved around between ever more elaborate vignette installations (pictured at the top) including a small house built to present the women's CurveID line. Levi's has been very skillful in mining its vast archives to take advantage of the endless trend for vintage looks. For spring, they are reviving their sixties-era Sta-Prest wrinkle-free brand as a counterpoint to the rumpled thrift-shop-hipster look. New technology has not been abandoned, however, as they are continuing their high-tech Commuter line (pictured left) for cyclists and remain committed to the Water<Less program to produce denim jeans with a minimum amount of water usage. A well received collaboration with American brand Filson will continue as part of a Made In USA program for Levi's premium lines, and there will be more selvedge denim next season for those who worry over that inner side seam on their jeans. The whole time we scarfed down some superior deviled eggs from chefs Jeremy Fox & Charlie Parker and listened to string quartet Cello Street reinterpret the music of Lady GaGa and other pop stars. Sadly, since some special ingredients were late to arrive, we missed some special Patron tequila cocktails, but we had to move on. 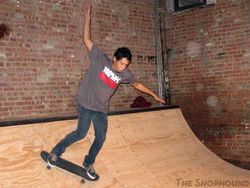 Next up was Chelsea's Drive-In studios where the Australian beachwear line Mambo was being launched through an exclusive arrangement with Bon-Ton stores which is also home to John Bartlett's exclusive men's labels. With skaters flipping over a half-pipe in one corner and custom t-shirts being made in another over earsplitting music, The Shophound's drinking companion remarked that the whole scene looked a lot like Entertainment 720 from Parks & Recreation. While the cacophony was a little forced, there were sexy models in bathing suits hanging around (below), and who doesn't like that? It all looked like an easy sell for Bob-Ton's mostly midwestern stores. There was also Jason Stackhouse, as True Blood star Ryan Kwanten, looking appropriately scruffy and Stackhouse-like, was pressed into service to promote the brand from his homeland. Luckily, there were no missing ingredients at the bar, and there were plenty of little tacos, tiny meat pies and spicy shrimp (with no barbie in sight). Before we took off with our free t-shirts, we even tried a tiny vegemite sandwich, which didn't taste nearly as gross as we thought it would. 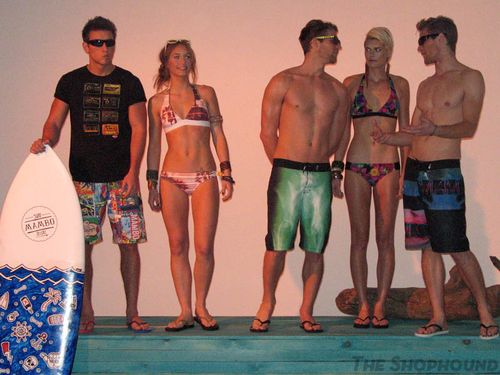