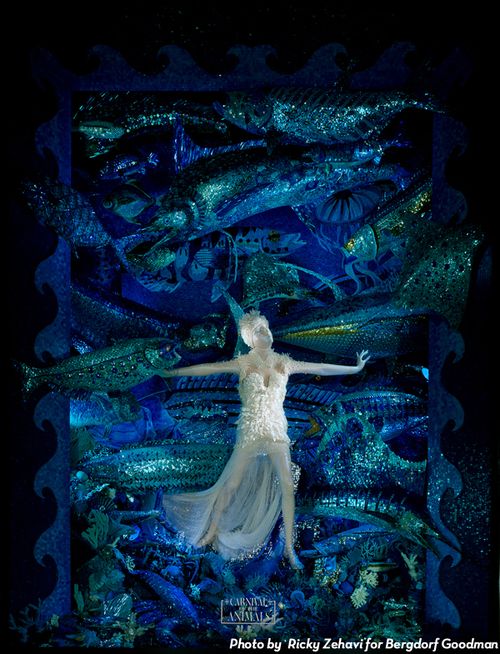 You will, no doubt, be hearing a ton today about that other store that is debuted its Holiday windows last night in conjunction with a huge pop star, but yesterday afternoon, we strolled a few blocks away to Bergdorf Goodman where our favorite windows of recent Holiday seasons have been found. The Shophound was not disappointed. Once again, Bergdorf's has presented five individual but related scenes in their Fifth 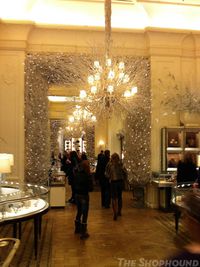 Avenue windows that are a marvel of lavish design. The theme, this year is "Carnival of Animals", incorporating creatures of the land, air and sea (above) in fanciful tableaux that are causing passersby to stop for extended gazes into the windows as they try to take in the all the intricate elements that make up the designs. Along with the Bergdorf visual team's prodigious handiwork, he windows actually work in a bit of product from the store here and there, including a specially designed dress by our favorite glittermeister, Naeem Khan, but the overall goal is less to sell specific items and more to stop people in their tracks. The Men's Store across the street joins in as well with a more whimsical series of windows featuring a weightlifting executive lion (below) and a snazzy singing cardinal among other gentlemanly beasts.

Of course, all those gawkers make it damned hard for The Shophound to photograph these windows for you, but Bergdorf's own blog, 58th at 5th, has dutifully documented them far better than we could. 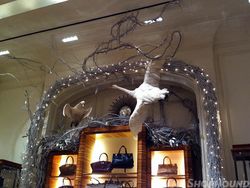 We have reposted some of our favorite images, but be sure to click HERE for a complete slideshow of all the windows, or better yet, just go down there and see them for yourself so you can really take in all the impressive details that Bergdorf's has made part of its Holiday signature —and don't forget to have a look inside. The store's visual team has not neglected the interior by any means. The main floor of the Women's store is an opulent sight on any given day, but the team has outdone themselves this year in creating striking decorations that blend seamlessly with the store's already ornate design. It looks like a Beaux-Arts, winter forest is taking root amongst the vitrines and caselines (above left and right).

We'll have more about that other store later, but, for now, you should know that the pop star has some worthy competition over on Fifth Avenue.

They’re Alive: Carnival of the Animals (58th at 5th/Bergdorf Goodman) 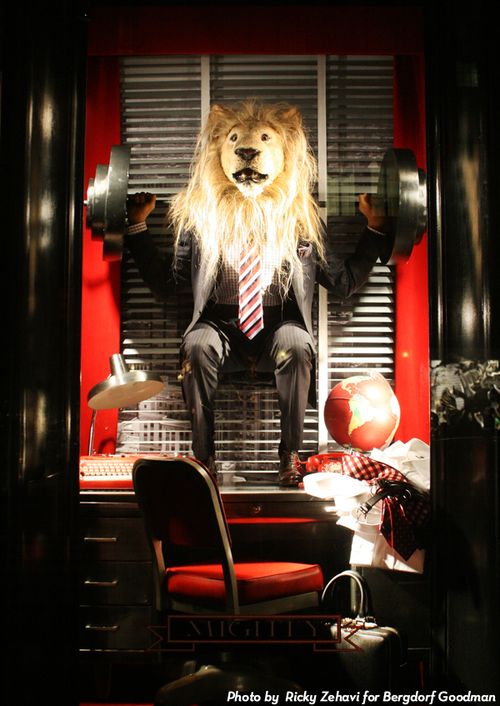