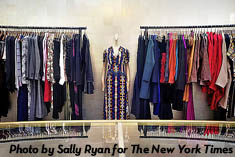 Today's Thursday Styles switches up the format a bit by morphing its longstanding Critical Shopper column into the "Global Shopper". We're not sure if Chicago qualifies as all that far flung when you put it in the context of the entire planet, but, it's a start.

Alexandra Jacobs takes on the newly upgraded version of the Windy City's IKRAM, a well-regarded, independent boutique that got an invaluable prestige infusion when it was revealed that the store's owner was the mastermind behind First Lady Michelle Obama's soigné style. She calls the store "thoroughly glorious", and yet she sometimes can't seem to wrap her mind around some of its more adventurous offerings. To better understand, she enlists the assistance of the tireless Felicia whom she proceeds to torture mercilessly by trying on an abundance of staggeringly expensive merchandise with no intention of purchasing anything.

Eventually, she manages to get out of there with only a pair of $40 Sonia Rykiel socks in her bag but vowing to return when her ship comes in. We just hope she doesn't expect Felicia to be too happy to see her face again.