Anyone wearing Gianni Versace's 1991 suit printed with multiple images of Andy Warhol's Marilyn Monroe with a few James Deans thrown in for good measure (pictured left), would be making a hefty pop culture fashion statement, but imagine if the person in the suit is Elizabeth Taylor, the only screen goddess who could rival Monroe, the only other one immortalized by Andy Warhol in the same way, and of the three in the picture, the only one to survive the middle of the 20th Century. The suit and the wearer then become some sort of pop culture meta-explosion. It's Monroe, the woman who told us that diamonds are a girl's best friend being saluted by Taylor, the best friend diamonds ever had, with a nod to Dean, another iconic friend who also died tragically young. If Andy Warhol hadn't died himself before that suit was ever designed, he might have keeled over at the sight of it on Elizabeth Taylor.

This all to say that the mammoth trove of the late star's possessions currently on display at Christie's could only have belonged to one person. From anyone else, it might seem like the wretched excess of someone hopelessly spoiled and self centered (and more than a few people might have described the star that way anyway) but somehow, it seems right that all this lavish, precious stuff should have belonged to Elizabeth Taylor. Basically, her life defied logic, and so does all her stuff.

The show begins with her clothes, as one large room packed full of couture ensembles gives way to another even larger one. If Taylor liked something, she often bought it in multiples, and if she liked a designer, she would patronize the house passionately especially if they would make things for her in yellow or with flowers or, even better, both. There are decades of Valentinos to be seen including one gown in pink and purple that gets duplicated in reverse proportions of purple and pink. She faithfully patronized Dior from the days of Marc Bohan in the '60s and '70s to Gianfranco Ferré in the '90 straight through to Galliano. There is the obligatory tower of Vuitton luggage. She loved caftans, and hers were no mere poolside cover-ups, but sumptuously designed robes, many by all but forgotten '60s London designer Thea Porter (above right). 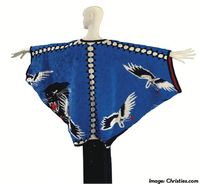 Another designer who gets an unexpected amount of attention is Michael Vollbracht (at left) whom Taylor enthusiastically patronized in the '80s, before he became the sedate designer for Bill Blass, and when his first name had an extra "E" on the end. His dramatic, handpainted and embroidered designs get a spotlight among the Muglers, Valentinos and Chanels. Surprisingly, there are only a few choice Halston pieces, but it seems hard to complain among the abundance of couture from nearly every designer you could name from the second half of the 20th Century.  Before we left the fashion section, we gazed into a smaller room arranged like a closet piled high with handbags and shoes including five different Hermès Kelly bags and well over 20 Chanels.

Even though, especially during her most scandalous moments, Taylor was sometimes criticized for being flashy or vulgar, she chose well from all those designers, selecting some of the most iconic looks particularly from Versace and Valentino. Or perhaps it was she who made them iconic. Hard to say, but even from less celebrated designers like Vollbracht, she picked some of his most dramatic, signature items, pieces that someone with less personal magnetism might have had trouble carrying off. Of course, everything appears to be in pristine condition, as it is hard to imagine that she would have physically had time to use or wear any of these things more than a few times.

Next, it's a detour into her important paintings, which will be auctioned separately, including a well-known Van Gogh, a lovely Pissarro, a Degas self-portrait and a fine Frans Hals among others. Not everything in this room is a gem. Among the Gallé, Daum and Lalique glass and crystal pieces are number of glitzy Jay Strongwater picture frames which seem a bit out of their league.

Already slack-jawed, we descended the stairs into the memorabilia section including her three Oscars, costumes saved from her film hits ("Cleopatra") or more likely her flops ("Boom", "X, Y and Zee", and did anyone even remember that there is a film version of Sondheim's "A Little Night Music"?). There are bound screenplays, personalized leather director's chairs (which, apparently, were a thing) and vintage posters made priceless by her personalized messages. There are notes from Presidents and other stars. Perhaps the most poignant piece is her personal copy of "National Velvet" by Enid Bagnold displayed next to a children's book, "Nibbles and Me" purportedly written and illustrated by the young Taylor herself with, we have a sneaking suspicion, some assistance from the MGM publicity department. Then, finally, it's on to the jewels, the immense volume of which must be seen to be believed. We knew she had a lot of incredible jewels, but who knew she had this many? All of the famous ones are there, the enormous flawless ring, the La Peregrina necklace (left), the Prince of Wales Diamond Brooch she purchased from the estate of the Duchess of Windsor, the Burton Diamond Brooch and the antique tiara from Mike Todd. Clearly, Richard Burton gave the best diamonds, but Todd was no slouch either. By the time she made it through Eddie Fisher, it was clear that Elizabeth Taylor would have to start satisfying her taste for shiny things herself, and so she did, with zeal. The vast majority of the pieces shown seem to have been purchased by Talyor for herself from nearly every celebrated jeweler in the world with Bulgari, Cartier and Van Cleef & Arpels featured prominently, and then eventually from her own ill-fated jewelry brand, House of Taylor. Imagine waking up in the morning and deciding to wear emeralds that day requiring a choice among 20 or 30 different major necklaces, bracelets rings and earrings. Then, tomorrow, rubies, perhaps sapphires the day after that. There are literally hundreds of jewels on display from classic styles to a

particularly eccentric necklace created from diamond encrusted monkeys and bananas with matching ear pendants (at right) —one of a few gifts from Michael Jackson on display that are sure to get special attention. There are so many major pieces of jewelry, that after seeing them, the windows of Manhattans most celebrated jewelers start to seem a little meager in comparison.

By the end of end of the exhibition, which seems to take up every square foot of Christie's showroom space, you wouldn't be faulted for being genuinely overwhelmed. Maybe it's because she became so philanthropic in her later years that the stunning volume of her possessions doesn't make her seem like a high-class hoarder. She seemed far too savvy not to have realized at some point that everything she owned would become imbued with some extra, intrinsic value that could benefit someone else after she was gone, especially since battling an endless string of potentially deadly maladies has long been a part of her legend. Even a portion of the $30 admission fee goes to the Elizabeth Taylor AIDS Foundation.

That fee may seem steep just to gawk at the remaining possessions of a screen goddess, but there is a sense wandering from room to room that one will not see a collection of clothes, jewels or memorabilia on this scale again. It's not that Taylor was the last survivor of her era. There are still other Silver Screen icons like Lauren Bacall and, yes, Debbie Reynolds still among us, but it's hard to imagine anyone other than Saudi royalty prodigiously amassing so much stuff —and it looks like she kept everything. In the end, it adds another final dimension to Elizabeth Taylor's mesmerizing story.

The Collection of Elizabeth Taylor on display at Christie's through December 12th to be auctioned on December 13th - 17th.

Posted at 11:09 AM in Auctions, Celebretail, Special Events | Permalink | Comments (1)

Great review as I attended the first showing. I also thought it was organized great by christies, not crowded and able to look at everything and take your time. Speechlessly awesome to view, for sure!!!