A Gold Star For SPACE NK ★

MYSTERIES of the UNIVERSE:

Yes, People Are Still Lining Up
In Front Of The UGG Store 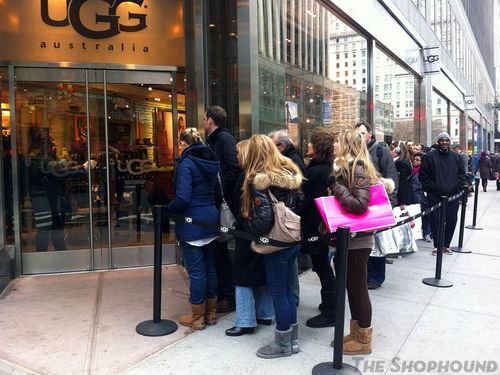 A couple of years ago, The Shophound noticed a strange phenomenon in SoHo in which people would stand in long lines in the cold outside what was then the only UGG store in Manhattan despite the fact that UGGs are widely available in over 80 stores in New York City. At the time, we thought it was some kind of fluke or a sign of a tiresome trend that had hit its peak, but no, last year there were more UGG stores and consequently, more UGG lines.

In case you were wondering (and we know your curiosity has been burning on this one) the lines are back again —at least in midtown. The above photo was taken yesterday afternoon in front of the UGG boutique at the corner of Madison Avenue and 58th Street where the line extended nearly halfway down a particularly long block. Why anyone continues to do this, we have no idea. It seems pointless on all fronts, but, as you can see, many people (tourists, they have to be, right?) in line are already converted devotées to the chunky, unflattering footwear.

We're beyond going on and on about why we can't stand UGGs at this point, but we still cannot endorse waiting in line for no reason whatsoever, so if you are hopelessly addicted to these shoes and you ust buy them from an official retail outlet, you might want to know that the third UGG boutique in New York, on Columbus Avenue between 67th and 68th street does not seem to be plagued with lines. In fact, The Shophound passes it often in our travels, and we have not noticed any lines outside since the beginning of the Holiday Shopping Season. So if you must indulge yourself, get out of the SoHo and Midtown crowd melée, and head across town to the more civilized West Side, just don't tell anyone we sent you.