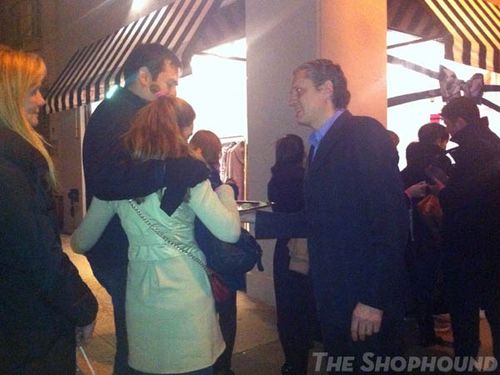 New Yorkers have come to expect seeing people waiting in line on the sidewalk for all sorts of reasons. Maybe it's the latest iPhone, any number of sample sales, the ridiculous Bleecker Street Magnolia Bakery line or the even stupider annual UGG store line which appears like some mysterious clockwork every Holiday Season. Add to the that list, the Ladurée line, which, by all reports, has become a daily fixture at the Madison Avenue home of the famed Parisian confectioner.

A tipster has told us that this particular queue has taken on epic proportions this months as New Yorkers are now waiting around the block to pick up some of the mouthwatering macarons that have made Ladurée famous. We passed by last night at around 7 PM, and the line still reached the corner of Madison and 70th street, populated either with people who were prepared to invest some time in their macaron shopping excursion, or blithely thought they would breeze in and pick up some treats, but decided to stick it out and wait their turn. While we would remind everyone that there are plenty of places in New York that sell delicious macarons, we will admit that Ladurée's are exceptionally tasty, and the folks running the store are not taking their customers for granted. We saw hat they are periodically treated to free snacks while the wait, which is more than we can say for the poor creatures sacrificing their dignity in the UGG line.

Ladurée 864 Madison Avenue between 70th & 71st Streets
Previously:
Mysteries of the Universe: Yes, People Are Still Lining Up In Front Of The UGG Store