Since you should be getting your Holiday shopping started this weekend, there are two wildly different events happening that you won't want to miss. We can't guarantee that you will find any gifts, but at the very least, they should be extremely entertaining, and worth braving the crowds. 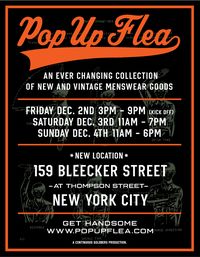 First, there's the long awaited return of The Pop-Up Flea, the annual showcase of artisanal and heritage menswear brands from A Continuous Lean's Michael Williams and UrbanDaddy's Randy Goldberg. It's a little later this year, and has moved north to NoHo at 159 Bleecker Street for one weekend only. We don't have an official line-up, though we are fairly sure that Shophound fave L.L.Bean Signature will have another display, making it the rare opportunity to shop this line in person in NYC. They and other participants often bring exclusive items just for the event that are unavailable anywhere else. Other labels that have appeared in the past have included Gitman Vintage, Alexander Olch, Billykirk, Gant Rugger, Schott and Riviera Club among others. If you know someone who is mad for classic American brands (and if you are at all hipsterish or even slightly hipster-adjacent, then you definitely do) pull on your Red Wings or your Wolverine 1000 Mile boots and get over there.It opens this afternoon at 3 PM with afternoon drinks, so get off work early.
UPDATE:

Click on the little image at right for a current roster of the Pop-Up Flea participants this season. There are a lot of the familiar booths with some familiar items, but newcomers include former J.Crew designer Todd Snyder's debut collection. Standouts to us included Isaora's striking garment-dyed down filled hoodies and Rancourt & Co.'s American made-boots and handsewn loafers. L.L.Bean Signature has shelves and shelves of their deluxe Bean Boots with canvas and Horween Chromexcel uppers which will likely go fast. 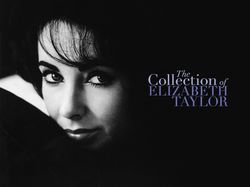 If your tastes run more toward the luxurious and opulent, then you may have heard that Christie's is opening it's exhibition of items belonging to Elizabeth Taylor this Saturday. The display runs through December 12th, and can be seen only by purchasing a time-specific ticket. We don't think we can overestimate the interest in this auction. Aside from the mind-boggling jewels (which are worth going out of your way to see by themselves), Taylor had amassed an incredible collection of Couture clothing from the world's most coveted labels over decades as well as some of her film costumes. Then there are other objects like Vuitton luggage, costume jewelry and all kinds of memorabilia that will be sold in a series of five separate auctions over four days. This is as big as this kind of thing gets. You know, like when a toothbrush sells for five figures. She was an extraordinary star with extraordinary stuff, and we wouldn't miss seeing it. If you can't make it this weekend, the exhibition will be up until December 12th, after which the auctions will start. Somebody, somewhere will be getting some incredible jewelry for Christmas this year.