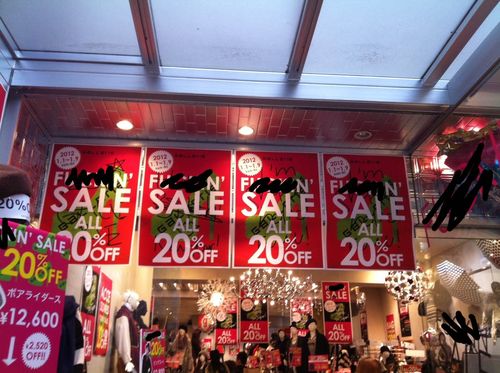 It's sale time in Osaka, Japan, but one department store apparently needs a primer on what English-language words are appropriate for sale signs. We have the fine folks at Gawker to thank for directing us to the Japanese Subculture Research Center, a very entertaining blog about Japanese Culture filtered through a Western sensibility. They relayed these pictures from a reader of mixed japanese descent who found took the above photo in Osaka just a few days ago.

Japanese fashion has a longstanding history of decorating clothes with English-language words that they don't actually understand, often resulting in outfits with hilarious nonsense messages, but this takes things a step further. Maybe the folks at this store are unaware that this particular colloquialism, while prevalent in movies, cable TV shows and Hip-hop to name a few things, is not considered appropriate a part of discourse in polite society.

Or, maybe they just wanted to get attention and shock people. (We have posted the unredacted photos after the jump, just so you can get the full effect, but if you are the type to be offended by casual use of coarse slang for copulation, then by all means, do not click through!)

Either way, we think its hilarious, but the great crime here is not one of vulgarity, but of exaggeration. 20% off is emphatically NOT a great ?µ¢&in' sale. It's a nice little savings, but no excuse to break out the vulgarities. This morning, we got an email from Mr. Porter (the new men's offshoot from Net-à-Porter) announcing its final reductions up to 80% off.
That's a ?µ¢&in' sale. 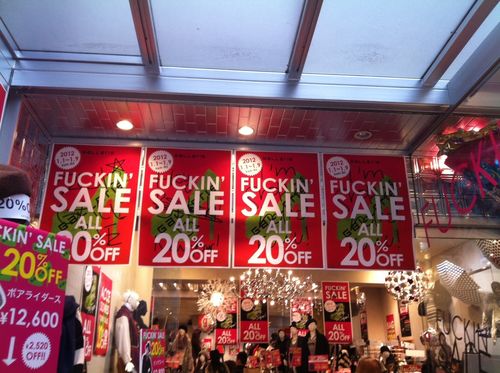 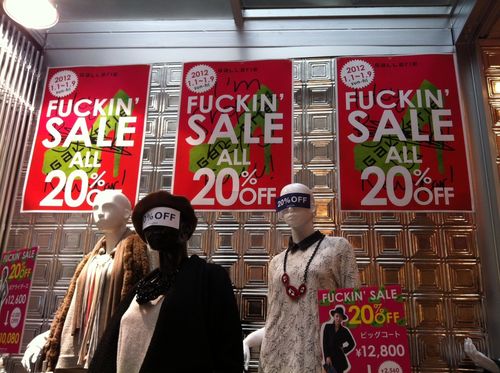