Jason Wu Is Coming To Target

EMPLOYEES of the MONTH: 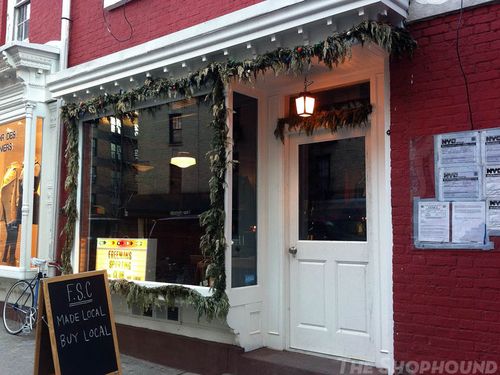 Perhaps it's because its building on the corner of Bleecker and Christopher Streets has been covered in scaffolding nearly since the store opened about a year and a half ago, but The Shophound only just noticed last weekend that Freemans Sporting Club moved its West Village location half a block down the street to 343 Bleecker, right next to Comptoir des Cotonniers. When we commented to one of the sales staff that the move looked like a better location, he laughed and admitted that it was particularly nice not to be in a building that falling down.
Well, that is always a plus.

In fact, the new store is only a temporary location that Freemans will be using until major structural repairs are completed at its previous home, but you may not immediately realize its ephemeral quality after a look at its well appointed interior. The elegantly appointed store is actually a cunningly crafted stage set of a store that can be quickly removed and re-assembled whenever the permanent space is ready to be re-inhabited. In a process exhaustively chronicled by Secret Forts, the folks at Freemans, devotees of authentic Americana, decided to turn to the cheap copies of the expensive antiques they might really want for their store, and quickly transformed a long-empty storefront with all sorts of visual tricks including a remarkable amount of faux bois painting. As Freemans mastermind Taavo Somer tells the blog,

The underlying concept is an authentic fake. Instead of faking a “real” American shop with the trappings of tailoring and products from overseas wrapped in old glory, we wanted to be authentic in what we are doing. We actually are an authentic American made brand, and this is our authentic temporary shop.

In other words, they took a bunch of old stuff and tarted it up to make a whole new/old/fake/real thing. It's just meta enough to delight your average hipster, and at the same time, the perfect setting for Freemans' widely admired classic clothing and accessories.

We actually thought that the space, on a better traveled block of Bleecker, might be better for business than the one it substitutes for, but seeing how cleverly the folks at Freemans have created it, we wouldn't be surprised if they could make a destination out of a basement in the middle of nowhere.