Looking Ahead On Madison Avenue, Lots Of Relocations And Expansion
-Not So Many Newcomers 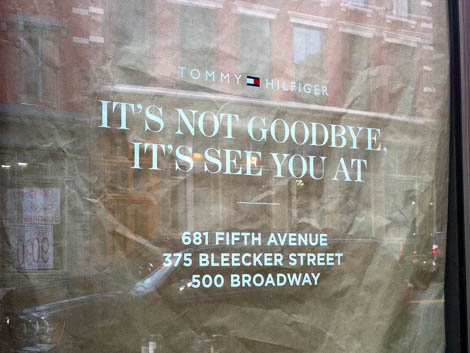 Sometimes it's hard to tell what's going on with Tommy Hilfiger's brand. It has had a rocky history, but with a lucrative exclusive deal with Macy's and a new arrangement with Italian luxury manufacturer Itierre to fully produce his Simon Spurr and Peter Som designed signature runway collections (possibly for the first time), Hilfiger seems to be on the upswing. Despite some dodgy attempts to broaden his appeal, like the failed "Tommy" contemporary line that briefly took over his Bleecker Street shop, he seems to be on his way to rivaling Calvin Klein to be the top jewel in parent company PVH's crown. That's why it was a little surprising to see his extravagant flagship boutique on the corner of West Broadway and Broome Street shuttered not for renovations, but for good.

Why, exactly? Presumably, the store was not pulling its considerable weight which is surprising in tourist-heavy SoHo. Perhaps the designer's large Hilfiger Denim store on Broadway, which remains open along with the rest of his New York locations, was pulling business away from the main store, but some official explanation will probably be forthcoming shortly.

It's not that it will be terribly missed by locals. Originally designed to blend with SoHo's distinctive, historic cast-iron architecture, the building was roundly criticized for being a ersatz, Disney-style imitation which emphasized rather than obscured its newness. Eventually, Hilfiger painted the entire building a dark charcoal gray to minimize its sore-thumb qualities. Now the question is, who will take over the sizable multi-level retail space, and will whoever it is invest in an exterior remodel to distance themselves from the previous occupant?

I am really sorry to see this location close. As a former visual display person, I personally really loved the presentation at that store. From the time it opened thru the years, each time I stopped in it was FUN to be there. Yes the logos on all the clothing was a turn-off but the Ralph-like merchandising was seriously great. One time they had a ping-pong table downstairs? That is where all the sale stuff ended-up at affordable pricing. {Not to mention, but I will anyway, they had a great ladies room}. This multi-tier space is so much better than the new Ralph space a few blocks away. Hint, hint...all you realtors.