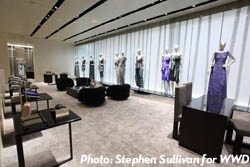 Giorgio Armani unveils a revamped, updated Madison Avenue home this week (pictured at right), but the real news for New York shoppers will be the return of Emporio Armani to Madison as well as the first Armani Junior children's store in North America all the way up at 88th and Madison. It will be well out of the way of the shopping street's most glamorous boutiques, but perfectly placed closer to Carnegie Hill's cluster of luxury children's boutiques.

Emporio Armani will re-appear on Madison Avenue between 57th and 58th Streets in a former home that had been converted to a unique Armani Collezioni store when the huge Armani 5th Avenue brand palace opened couple of years ago. Most recently, it had served as a temporary store for the main collection during renovations on the original boutique at the corner of 65th Street. While the Collezioni line will presumably remain as a label aimed at wide distribution at department stores line Saks and Neiman Marcus, WWD reports that Giorgio Armani's newly aggressive expansion will focus on the main collection and Emporio. Twelve new stores are expected to open in North America this year including three stores for the main collection, eleven Emporio units and the aforementioned junior store. Reportedly, Armani volume dipped after the turn of the century, but is currently on the rebound.

While the big brand palace on Fifth Avenue seems to be meeting its mission of delighting tourists, Armani is now turning its focus back to where rich New Yorkers really shop: Madison Avenue. Expect the new Emporio and Junior stores to be open in late Spring or early Summer