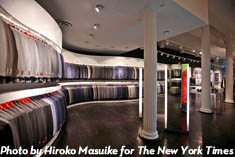 This week, the Critical Shopper returns to the Thursday Styles as Jon Caramanica tackles the next generation of men's clothing stores at Suitsupply in SoHo. As fashionable men are rediscovering the the pleasures of tailored clothing and dressing up, they are also discovering that the cost of fine men's suits has risen exponentially since the last time they checked. This is where the Dutch retailer Suitsupply comes in, saving the average guy from the indignity of looking like they shop at Men's Wearhouse.

Of course, Caramanica is no average guy, and easily recognizes one of the store's many stock silhouette as being inspired by the rarefied Neapolitan tailor Isaia. Already, he's too good for this place, so he, perhaps reflexively, tries to tie it in to the fast moving world of menswear bloggers (something the Styles section seems to be a little over-obsessed with these days).

This is upmarket for the Tumblr generation, for the #menswear movement, for those who crave Kiton and Isaia and are still a few jobs away from being able to afford them. These are young men who sweat the difference between super 110 and super 130, who take seriously the difference between full- and half-canvas construction, who demand hand-stitched lapels, who get aroused by patch pockets.

Of course, those style bloggers wouldn't be caught dead in some Dutch facsimilie of the precious Italian sartoria or even American natural shoulder hand tailoring they worship. And we're not sure that the mere presence of a hashtag adds real significance to anything. Ultimately, our shopper is frustrated by not being able to find exactly what he wants, despite being impressed by the store's bright ambiance and contemporary sense of style. At around $1,000, the made-to-measure offerings suddenly seem overpriced compared to their ready-made counterparts which fall under $500. Caramanica is already savvy enough to know that the working cuff buttonholes on Suitsupply's jackets are a smokescreen designed to impress customers who aren't sophisticated enough to know that a higher quality suit would be hanging on the rack with a basted, button-free cuff so that it could be easily fitted and then finished properly instead of removing and re-sewing the entire sleeve to get the right length, a far more complicated alteration.

In the end, it looks like Suitsupply could be a great resource for guys who want modern, stylish suits, but who don't know or care too much about the minute details of clothing they probably can't afford anyway. Our shopper is clearly not one of these people. Even a little knowledge can spoil you.  Sadly, The Shophound can relate.