Will Monika Chiang
Be The New Tory Burch?
+
Duckie Brown Has Big News 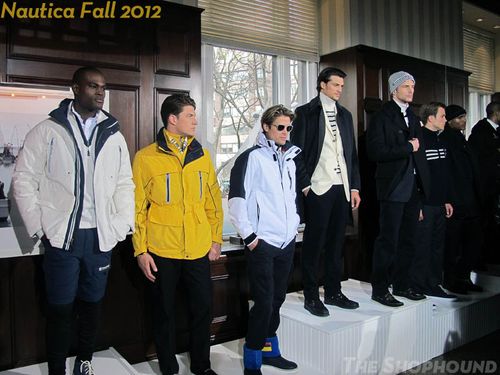 Nautica lived up to its tradition of being one of Fashion Week's most crowded presentations, and if you are wondering why this moderate department store staple draws such a crowd, have a look at the handsome gentlemen pictured above. This time, the brand took over Ed's Chowder House in the Empire Hotel and lined up 30 top male models for the crowds to gaze upon, which they did while enthusiastically sipping wine. 2:30 in the afternoon isn't too early for that on a Friday, is it? In a twist that seems both glaringly obvious and ironically clever, NAUTICA designer Chris Cox took inspiration from "the iconic watermen of the American northeast coast: Sailmakers, Dockhands, Admirals and Coastal Prepsters". So, yes, Nautica served up a novel nautical theme for Fall. Call it "back to their roots", if you will, it still made for some appealing pieces including Brian Shimansky's winter-white blazer and Joost Van Der Hulst's black leather shearling toggle coat. Whether we will see these items on the racks at Macy's this Fall remains to be seen, but the show looked smart and up to date. Though we photographed everything everything exhaustively, the crowds didn't make it easy, but the folks at Nautica have provided us with a complete lookbook, so click the thumbnails below for some of the best looks. 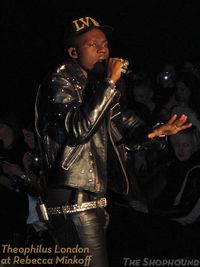 The excessive sprawl of Fashion Week has made for plenty of hard choices due to double and triple booking. It's annoying, and, honesly we only get invited to a fraction of the shows being held. Yesterday, The Shophound had to choose REBECCA MINKOFF over Yigal Azrouël mainly because after getting out of the crush of Nautica's presentation, there was not enough time to get all the way down to 14th Street in time for Yigal, and Rebecca was happening a few steps away at the Mercedes-Benz Fashion Week tents. Call it the lesser of two hassles. At least, in the big Theatre tent, "Priority Standing" can reliably be interpreted as "you are saved from the indignity of Standing Room, so just pick any reasonable open seat except for the first couple of rows unless someone asks you to move." It works, and nobody gets hurt. 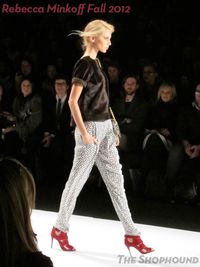 Ms. Minkoff has shown she has just as canny an eye for marketing as she does for product development, so she managed to get singer Theophilus London (above) to open and close her show in a live performance that immediately added excitement to her peppy sportswear collection. The clothes, her fourth apparel season, were bright and appealing like the insanely popular handbags and accessories that support her expansion into other categories, and more sophisticated items like a black shearling t-shirt (at right) showed potential for a broader focus as her line evolves.