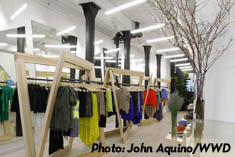 Yigal Azrouël's matinée idol looks have made him a favorite at Page Six for a while, but you will probably start seeing him more in the business section as he begins an aggressive retail rollout of boutiques for his fast growing contemporary line Cut 25. It starts today with the the label's first store opening on Grand Street in SoHo with locations on Bleecker Street and Third Avenue on the Upper East Side to follow before the end of the year. By 2013, the designer wants to see 10 Cut 25 stores in what he calls "assertive company-owned retail" in WWD. Azrouël is pitching the label to the trend-driven customer who wants to "buy it now and wear it now,” and takes inspiration from "cool downtown girls and how they layer their pieces.” The designer is currently expanding the line without extra investors, though he won't rule out their participation in the future as he has plans to add accessories, swimwear, sunglasses and shoes to the label over the coming seasons.

The rollout will start, however, with the SoHo store at 129 Grand Street, an offbeat but spacious 1,400 square foot location between Broadway and Crosby Street with striking, sculptural wooden display racks holding the trendy collection which is priced 55% lower than the main Yigal Azrouël label. New Yorkers will have the chance to get on board first, and it looks like, if all goes as planed, this train is set to speed along swiftly