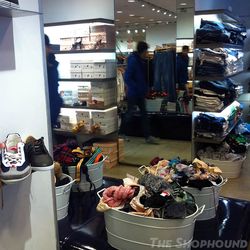 There's usually a bit of a lull just before Fashion Week takes hold of the city, so earlier this week, several blogs were abuzz about Scoop's "Cleaning Out Our Closet" Sale which began this morning at the chain's corner store at Washington and West 14th Streets. Familiar shoppers will be aware that the lower level of that particular Scoop Street location is usually a clearance department anyway where everything is sold at 50% off the most recent price, but the addition of last season's Fall goods should spruce up the selection, right?

So we stopped by this morning, and saw a few new bits and pieces that were obviously recently transferred over from Scoop's regular locations including lots of women's and men's shoes, but by and large, everything looked awfully familiar. In going over the men's clothes, we noticed an unusual amount of linen shirts and lightweight trousers. There was a whole rack of swimwear, and a stack of Gant by Michael Bastian shirts that were from Fall 2010 (always easy to tell since he makes seasonal labels). So where was the rest of the good stuff? We walked a few steps down the block to the Scoop Men's store and found several sale racks full of Fall merchandise at 40% off the ticket price —still a pretty good deal, right, but not as good as 50%. Then we noticed some Mason's pants that we had just seen in the corner store, and a Hartford shirt, Paul Smith boots and DSquared sneakers, and a Rag & Bone plaid flannel shirt that were all, apparently, sitting in both stores, at two different prices. Confusing? Maybe just sloppy? Definitely annoying, though, that most of the best stuff is still hanging in the regular store. We are assuming that the 40% off signs were an oversight, since even the website is offering 50% off sale goods, but who can tell, and why should we have to ask? Get it together, Scoop. Who wants to shop in two places for the same sale?