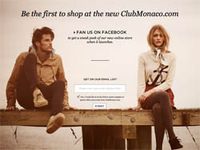 In the "What Took Them So Long", Club Monaco has announced that it will finally launch its first E-commerce site in about two weeks on March 26th. Facebook fans will get early access on the 23rd, but Canada, the original home of the chain, will have to wait until April 11th for its chance to shop online.

Why did they take so long to join the 21st century? Who knows, but the new site will be up to date including the kind of "editorial" content that is de rigueur among online retailers right now, as well as featuring new collaborations with designers Rachel Comey for women and Ernest Alexander and Rancourt & Co. for men.