ALEXANDRA JACOBS GOES SHOPING:
BACK IN THE BLACK:

Where Will Versace's Flagship
Land In SoHo?

Reports Of An Abercrombie & Fitch Gay Kiss May Be Somewhat Exaggerated

Yes, it's a kiss.
No, it doesn't belong to Abercrombie & Fitch.
Or does it?

You may see a bit of news racing through the magical interwebs that Abercrombie & Fitch, the gayest not-gay chain store in the world, has finally broken its self constructed glass closet and released a promotional video featuring (gasp) a gay kiss (pictured in the screenshot at right). We have embedded the video after the jump if you want to know exactly what we are talking about. It's suggestive, but actually less revealing than some Madonna videos we could mention. The video is by photographer Bruce Weber, who has been shooting for the retailer since the mid 1990s when the brand changed from a classic, conservative apparel chain to a youth-focused sportswear store whose advertising imagery suddenly featured cavalcades of naked young men innocently frolicking about. 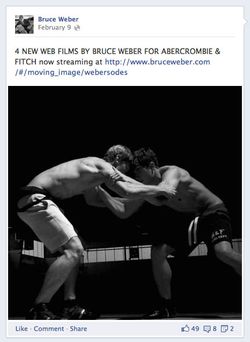 It is, apparently, one of four new "Webersodes" which have been presumed to be part of Abercrombie's ad campaign and can be found on his website HERE. Titled, "Other sports require one ball. Wrestling requires two.", it features a bunch of sexy wrestlers in an idyllic outdoor shower, uh, still frolicking to the tune of James Brown's "Give It Up Or Turnit A Loose". At one point, one guy kisses another on the forehead in a non-wrestling kind of hold. It's not quite the mack session you might be expecting given the hype, though it definitely crosses a fuzzy line that Abercrombie hasn't crossed in the past.
And maybe they still haven't?

If you know us, you know that we gleefully revel in almost every wacky move that Abercrombie & Fitch and their various subsidiaries make, but even this sounded too good to be true. The Shophound picked up the phone and called Abercrombie & Fitch to find out if this in fact was part of their campaign or just one of Bruce Weber's own video projects. While we initially reached a representative who is likely used to be taking clothing orders, we gave her a chance to find someone who could answer our question, and was told that it was not actually part of the retailers advertising campaign. Bruce Weber's Facebook page, however identifies them has having been made for Abercrombie & Fitch as of february 9th. So, were they made for Abercrombie and rejected, or are they meant to be sort of underground and viral? Somebody please clarify.

In fact, there isn't any indication on this particular video that it was filmed specifically for Abercrombie & Fitch. Usually their official videos will feature a company logo on the screen at some point, which this one does not have —even though some of the guys are wearing Abercrombie clothes (when they are wearing anything at all, at left). There's no trace of it on Abercrombie's website nor has it been uploaded by them to Facebook or YouTube (where it would probably be given an age verification requirement to view). We are pretty sure about this because we watched it a couple of time just to be certain (as you might want to). We might even watch it again later. Was the film meant for Abercrombie and then deemed a little bit too hot even for them?

Anyway, this story is making its way around the web, as sexy videos will do. We were initially skeptical because Abercrombie has been using homoerotic imagery for quite some time without ever including anything that is specifically gay. Sure there are lots of hot, shirtless guys in their ads and in their stores, but never has there been a kiss, or something that would definitively identify as gay. Abercrombie stores are just like gay bars, but the strategy of walking this ostensibly ambiguous line where gay people can identify the brand's imagery as gay while straight people can blithely dismiss it as a couple of shirtless guys just hanging out has worked exceptionally well for the company, however disingenuous it may be. Why would they change things now?

A NOTE: We have been revising this post over the course of a couple of hours since it was originally published as we have discovered more information. We will continue to adjust, noting updates as necessary.

UPDATE: The video has been removed from the hosting service that allowed us to embed it, but can still be seen on Bruce Weber's own website HERE.