What Kind Of C.Wonder Will We Be Seeing At Columbus Circle This Fall? We hate to break this to you, but if you are reading this, then it is probably too late for you to get the things you want from H&M's MARNI collection which hits select stores today, unless of course you are standing in line and waiting for the store to open right now. As a rule, The Shophound doesn't even try to compete with the folks who will get up before the crack of dawn to get first choice at these launches. This time, however, we thought we had an edge because for the first time, we had been invited to a special preview shopping event for the collection at the H&M flagship on Fifth Avenue. What a dream! No waiting. No teeming crowds, and our pick of whatever we wanted.

Well, that was a nice moment of delusion. What were we thinking? Had we not seen these same "insiders" gleefully trample each other for a free pair of flip flops at the Fashion Week tents? We managed to get through the check-in line and get inside the store at 7:15 PM, only 15 minutes after the event began only to find that shoppers had already stripped the shelves of any and all of the smaller accessories and shoes, and were well into doing the same with the clothing on the racks. The general M.O. was apparently to load one's arms or H&M shopping bag with as much as stuff as possible and then either try things on or find a spot in the store to sit down and sift through one's findings while guarding the pile of goods like a feral cat. It's not like we were looking to pick up the entire collection, but while the men's section was slightly less ransacked, it was still fairly well raided. Our hopes of picking up a pair of those sunglasses or sandals were quickly re-adjusted. Of course, everything will be restocked for the public launch, but it looks like there is some serious pent-up demand for this particular collaboration, and it is likely to sell as fast, if not faster than its predecessors.

We were reduced to keeping an eye out for discards form the dressing rooms as H&M staffers dutifully returned them to the racks as efficiently as possible among the cocktail swilling customers, while we watched shoppers check out with multiple shiny tan Marni shopping bags stuffed with goods, a portion of which were surely headed for eBay (as we type this there are already over a hundred listings). We're not entirely sure the chain's rules on multiple purchasing were being enforced, but we were sternly warned that we had only ten days to return any of the Marni items.

On the plus side there were plenty of drinks and snacks being walked around by waiters, as well as a 25% discount on any non-Marni merchandise in the store. We managed to get out of there with the men's navy and black printed camp shirt and the last pair of men's socks anyone could grab. Of course, there were a few other options still available, but with UU Uniqlo Undercover coming next week, we do have to pace ourself. Leaving the store, we received a gift bag with one of the triangular silk scarves in a special colorway made only for VIP guests —our faith in elitism restored. 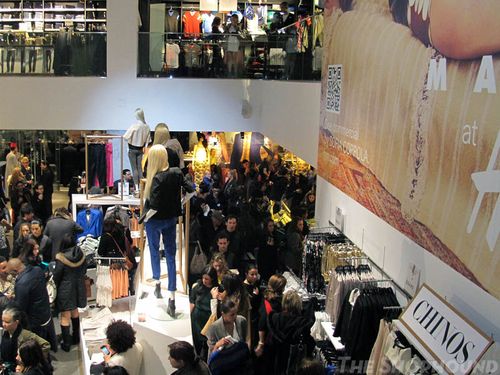