Marc Jacobs Makes The Most
Of A Bad Situation 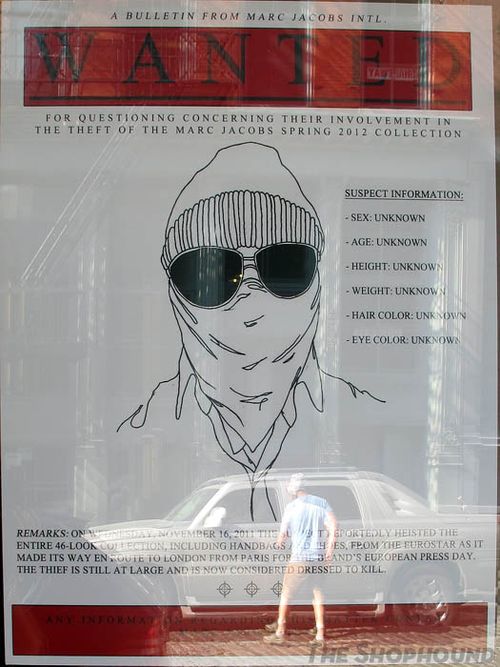 What do you do when you are faced with an unexpected, aggravating misfortune that is beyond your control?
If you are Marc Jacobs, you make a t-shirt.

You may remember hearing a few months ago that Jacobs' entire 46-look European sample line for Spring 2012 was stolen off the Eurostar train between London and Paris. So far as we know, the clothes have never been recovered, throwing a wrench into the designer's European Press activities, and to remind people of the designer's predicament, he has placed a mock "Wanted"-style bulletin in the window of his Mercer Street Collection boutique with a strangely Unabomber-esque sketch of a totally unidentifiable perp.

Of course, the poster is also available as a t-shirt, presumably for sale inside the store. We're not sure that the proceeds from the tees will make up for the expensive theft of an entire sample line, but a little humor can always ease the sting of a costly loss. As the bulletin states: "The thief is still at large and considered dressed to kill."