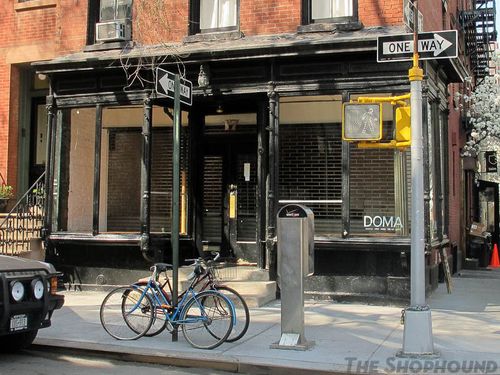 What started as a charming surf-inspired shop/coffee bar/lounge in SoHo is morphing into a fully fledged lifestyle label as Saturday's Surf , just been named one of GQ's Best New Menswear Designers for 2012, will be adding a West Village outpost sometime in the next couple of months at the corner of Waverly Place at 17 Perry Street.  We would have to assume that this will be in the former home of Doma Cafe and Gallery (another hybrid enterprise pictured above) an empty retail space right on that very corner just waiting for exactly such a tenant.

While there are no exact details beyond the vague time frame anounced in a recent WWD article on the label's Asian expansion plans, in which co-owner Josh Rosen states, “There’s a wonderful residential feeling over there, and it’s the ideal neighborhood for us.” It is indeed a particularly idyllic corner even though it is a few steps away from Busy Seventh Avenue South, and like its upcoming Tokyo and Hong Kong stores, it is expected to replicate the laid-back vibe of the popular if compact SoHo store with an espresso bar and, hopefully, an outside lounge out back. We don't know it this spot has a backyard for the lounge deck, but given the type of building and neighborhood, it's an even bet.

Posted at 11:25 AM in Designer Boutiques, Greenwich Village | Permalink | Comments (0)