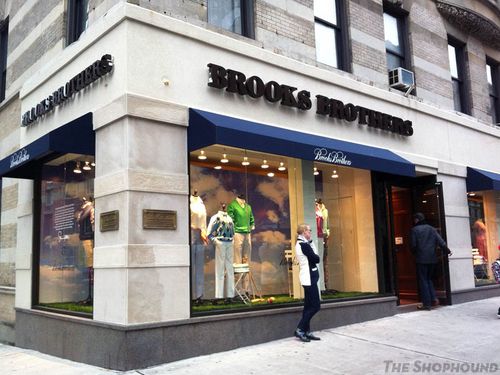 Yesterday, Brooks Brothers opened the doors to its eighth Manhattan store at the corrner of Broadway and 87th Street. Somewhat smaller than the Lincoln Center location, this 3,000 square foot location offers a capsule of preppy women's and men's basics along with a special section fort he chain's Fleece children's line, much like its crosstown counterpart on the East Side. We stopped by yesterday afternoon to find the well-appointed store we expected and a super-eager staff. Really, super eager. They could reel it in just a tad, but it was the first day after all, and the store itself is something of a test for the Upper West Side neighborhood to see how well it will support a clothing chain that is more upscale than the Banana Republic and Club Monaco on the next block. Aside from a few Columbus Avenue boutiques, there is little above 72nd Street on the West Side to specifically serve what is by all accounts a wealthier demographic than the neighborhood stores would suggest. The store also helps to make up just a bit for the lack of men's clothing retailers on the West Side offering a healthy assortment of Brooks Brothers signature basics like oxford button-down collared shirts, chinos, blazers and even a few classic business suits for last minute prep-fixes without having to go downtown.