Will Stores Accept Simon Spurr The Label Without Its Namesake? 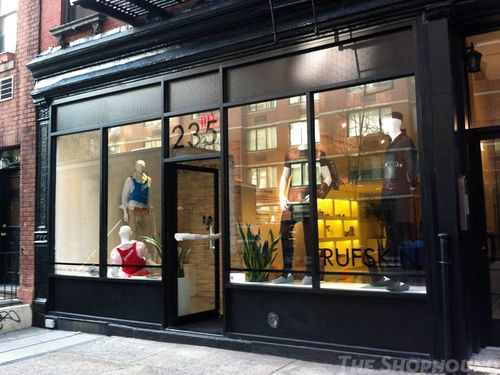 Are you the kind of guy who can count his body fat in fractions of a percentage point? Do you find more fashion inspiration in Tom of Finland than in GQ? Do you prefer the waistline of your meticulously form-fitted jeans to be just high enough cover the required bits -or maybe not? Or let's just put it this way: Are you looking for something to wear to the Black Party this weekend? 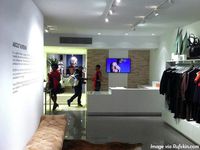 If you fit even one of the above criteria, then you will probably he happy to hear that the San Diego-based denim and sportswear brand Rufskin (possibly SFW but probably not) has just set up shop on 19th Street in Chelsea. You probably remember that a couple of years ago, the brand opened a pop-up shop on Eighth Avenue and 22nd Street that was well received, and now they are back with a permanent outpost. This new store, however is no humble Chelsea jeans and underwear shop. The folks at Rusfskin have created a sleek, white-walled SoCal-style boutique on an eclectic block that includes the original version of the trendy menswear shop Behaviour, the thoroughly charming French fabric store Les Toiles Du Soleil, and Nasty Pig (whose website is somewhat more SFW than Rufskin's, but tread lightly). 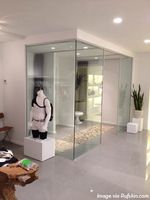 Inside, there's a stacked stone wall announcing the brand and racks of jeans, shirts and leather apparel cut with undulating seams calibrated to make the most of your physique, which had better start out stacked if you're even considering trying anything on. In fact, the glass walled dressing rooms (at right in an image from Rufskin's blog) would appear to be designed with voyeurism as a priority, but there are, in fact curtains to be drawn for modesty. There are, of course, a few things available for folks who can't help but indulge in the occasional carb, like leather and metal jewelry, exclusive soaps and toiletries, several books featuring pictures of men who would look good in Rufskin (when they are wearing anything at all) and, uh, socks?

It says something that Rufskin has chosen this particular neighborhood for its second freestanding store after it's San Diego headquarters. It is, after all, the home of the archetypal well-muscled Chelsea Boy, who has been eclipsed lately by the Williamsburg or Hell's Kitchen Hipster, but with a big gay nightclub like XL roaring back to town, the Chelsea Boy may soon see his day come once again.