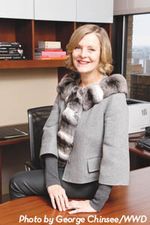 Today's WWD features an sizable article on current Scoop CEO Susan Davison which mostly focuses on the executive's efforts to re-invigorate the popular contemporary chain after it became a little sleepy following founder Stefani Greenfield's exit a few years ago. While discussing expansion, she mentions that, as may have speculated, Scoop is still looking for a spot on the Upper West Side. While the boutique has a substantial presence in SoHo, on The East Side and in The Meatpacking District, The West Side, where its main competitor, Intermix, has a small but longstanding unit on Columbus Avenue, has always represented something of a gap in the chain's coverage. Beverly Hills and Georgetown in Washington D.C. are also mentioned as potential locations for new Scoops, but Davison's mention of the West Side makes us wonder about potential NYC spots that haven't seemed to pan out. Right now, almost any location on the West Side would seem like a possibility, from space that has recently become available at Time Warner Center, to the Lincoln Square Area to Columbus Avenue or even on Amsterdam.

So what's the holdup? The West Side is still underserved by higher-end fashion stores, especially ones that offer menswear. Just pick someplace and move in already.