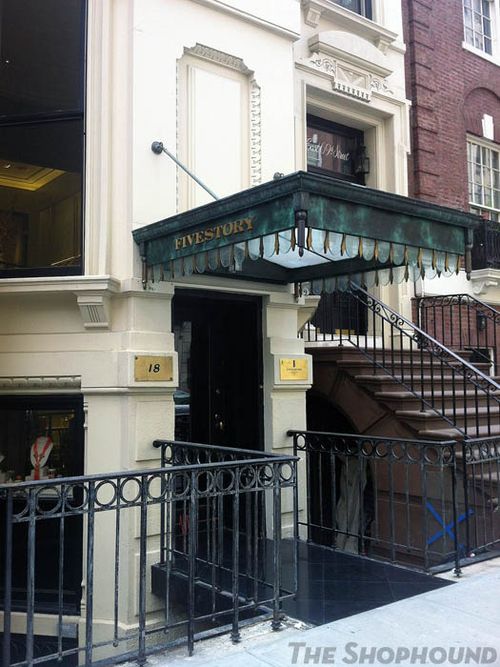 Something felt unfinished at the new boutique FIVESTORY when The Shophound stopped by on Friday, a day after it had opened to the public.
Maybe it was the paint smell.

We can't really blame the folks at Fivestory for straining to get their doors open on time even if there were still more than a few finishing touches yet to be applied to the store's interior. One room of the store was described to us as "where fine jewelry will be" by a sales associate who admitted that not all of the store's merchandise had arrived. Still, it is late April already, and there are goods that need to be sold before the selling season turns to clearance time and ridiculously early pre-Fall goods start rolling in.

We feel pretty confident that Fivestory will be fine. They certainly won't ignore a customer in there. We were greeted numerous times, sometimes one right after another in a slightly excessive display of hospitality that we will chalk up to the enthusiasm and high spirits that generally accompany a newly opened store. In fairness, nobody was overbearing in their attention either, and we could tell that an effort had been made to staff the store with professionals. It has an intimate layout that reflects the elegant 69th Street townhouse it once was, and the father/daughter team of Fred and Claire Distenfeld have clearly gone to lengths to include designers and brands you may not have seen or even heard of before. We didn't recognize many of the labels we saw, except in the tiny, surprisingly casual men's department which, reportedly outsourced to the folks behind Union in Los Angeles, featured Comme des Garçons, Bespoken and the Japanese cult label Visvim. Actually, the men's section was so small (half of a small room) that we wonder if it is even worth having in such an otherwise feminine store, but then you never know what's going to hit when you first open a store. Overall, the merchandised is presented with care, in a gallery-like way in places, highlighting the most adventurous styles meant for the most adventurous customers with a clear message that this is not the place to stop in for basics.

Fivestory is the kind of store that appears in New York only occasionally: The Ambitious, High Profile, Multi-Brand Luxury Boutique. Every season we will get a few new single designer stores planting their flags on the city's most popular shopping streets, and the multi-brand category has long been dominated by the rival contemporary chains Intermix and Scoop. In the luxury sector, however, it seems like only once in a while that a retailer has the nerve to take on the now well established likes of Jeffrey, Kirna Zabête and the towering obstacle course of fashion that is Opening Ceremony.  The Distenfelds have engineered an impressive publicity blitz including a glittery opening party and a covetable preview post in the New York Times written by Cathy Horyn. They also have have the sense to intuit a lack of just this sort of store on the Upper East Side. While all of its aforementioned potential competitors thrive below 14th Street, Fivestory finds itself in the middle of a renewed retail interest in Madison Avenue. "...I wanted to create something that had a really beautiful marriage between laid-back comfortable and downtown cool, but also embedded with this elegant, beautiful Upper East Side grandeur that has been around forever,” Claire Distdenfeld tells WWD. Will it become as influential as Colette in Paris, 10 Corso Como in Milan or the original Henri Bendel in its 1970s heyday? All three are stores that Ms. Distenfeld has claimed as inspiration. They set a very high bar indeed, but we may have to wait a little longer than the time it takes for the paint to fully dry to see if Fivestory reaches those lofty standards.

In regards to the menswear, the department is fully launching for the Fall. so stay tuned.

fivestory is amazing, dont be a hater.